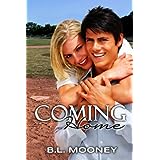 Rebecca Shultz has always known she was adopted. She couldn’t have chosen better parents than the ones that chose her. They’ve always made her feel loved and she’s never wanted for anything—except knowing why she was given up in the first place. Until she finds those answers, Rebecca feels as though she’s stuck in her past.

In the hopes of finding those answers, she accepts a job hundreds of miles away from the only home she’s ever known. However, not everyone is happy about her arrival. Someone wants her to give up the search and go back to her small town.

What Rebecca didn’t expect to find was Ryan Thomas. No one understands the attractive ad executive the way Rebecca does. He would rather spend his free time playing baseball with the kids in the same group home where he once lived than spend it with anyone that wants to take him away from there. Rebecca understands that these kids deserve a chance. Will Ryan be able to convince her to take one with him?

With Ryan distracting Rebecca with feelings she’s never felt before, roadblocks popping up that keep her from the answers to her past, and someone desperately trying to get her to leave, will she give up before her questions are answered? Will she stay and fight to find the truth?

Or will she find that she already has everything she ever needed and that home can be anywhere you want it to be?

I enjoyed this book.  There is suspense and a great who done it feel.  There are some mysteries and not everything in this book is immediately revealed.

Rebecca meets Ryan at her new job.  She likes him and goes slow.  They have a sweet love story but I felt like their love story was secondary in this book and there was a much bigger story to be told.  I would have like to see a little more spice here between Ryan and Rebecca, I think I would have felt more connected to them as a couple had I.  Despite that though I really did enjoy how he quickly became her rock and that she had confidence in him.

I also wish that the pace of this story moved a little more quickly for me.

Lastly even though I did not fall in love with this book, it was a really nice read for me.  There is something different about it that is very special and will keep you wanting to learn more.  I will be interested to read more B.L. Mooney I want to find out what she is going to dive into next.

B.L. Mooney started writing when the voices and storylines in her head ran out of room. They were getting too cramped and neither B.L. nor the characters could take it anymore, so she did the only thing she could do–she made room. She always knew she wanted to write, but vowed to make time for it later. Now that she’s made time for writing, most everything else falls to the wayside. That seems to suit the characters that keep popping up just fine.

B.L. lives in the Midwest and her other talents include in-demand cookies, a very dry sense of humor, and stealth eavesdropping. Some mannerisms, attitudes, or twists come from random sentences picked up while passing by strangers. So speak up the next time you have something to gossip about. You never know, it may just end up on the pages of the next book you read.