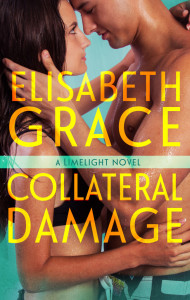 Hollywood It Girl, Francesca Leon, has just landed the biggest role of her career…one that could clinch an Oscar nomination and open doors. If she’s going to move her career to the next level and work with top directors, she has to nail this part — and keep her sexy, but unreliable leading man from screwing everything up.

Bad boy Calder Fox is the son of Hollywood royalty and fresh out of rehab after his best friend’s death sent him on a downward spiral of drugs and alcohol. While his fans still love him and the paparazzi stalk him, he’s never taken life, or anything about his career, seriously. He may be charming and drop-dead gorgeous, but if he doesn’t stay sober, he could ruin Frankie’s future and expose her long-hidden family secret to the voracious media.

Things heat up during filming and have the potential to become hotter, deeper, and much more real. But can Frankie trust Calder with her secret? Or is he doomed to sabotage his own happiness yet again?

You can read an excerpt on Heroes & Heartbreakers!

DAWN’S 4 STAR REVIEW
My first experience with Elisabeth Grace’s writing was the Indiscretion series. Which I thoroughly enjoyed. Her books have a light airy feel to them, even when they go into a heavy subject matter. You never feel weighed down, while reading her books. I found Collateral Damage very refreshing. It has a YA (Young Adult) feel to it with charming likable characters. The gripping prologue sets you up for a fun yet dramatic book.
Calder and Frankie are adorable. He’s Hollywood’s bad boy and she’s the new it girl. Thrown together to make an Oscar-worthy film…  Could this be the best thing that happen to them or is it the worst?? I fully enjoyed getting to know them. Each of them appear to have the world at their feet… But looks can be deceiving. They both have secrets, they try to keep hidden. Turmoil in their personal lives. It’s a touching story about finding that special someone who will fight for you and be in your corner. To show you the love you think you don’t deserve. The book also has a powerful message about second chances and forgiveness…. being forgiven and forgiving yourself! Calder and Frankie have a beautiful connection and wonderful intimacy. Plus, they are just fun!! You will enjoy their journey. I like the way it wrapped and went full circle in the end. Great conclusion. I plan on reading more from Elisabeth!

Elisabeth is giving away a $10 Amazon giftcard – you can enter on the Rafflecopter below!

Be sure to sign up for Elisabeth Grace’s newsletter – she’s releasing a new chapter of BUILT TO LAST every two weeks, which will be available to newsletter subscribers only as she writes it!

If you’re US based and you want to receive a text message when Elisabeth has a new book go LIVE, text ROMANCE to 313131!