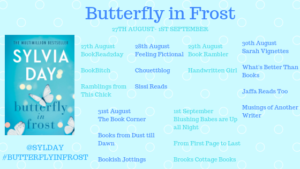 BBAUAN: If you weren’t an author, what would you do for a living?

SD: I would definitely own a business, but I’m not sure what I’d be doing because I have so many other things I’m passionate about, too. That said, I’ve wanted to be a romance novelist since I was twelve years old so I never really gave a lot of focus to a Plan B.

BBAUAN: What books have influenced your life the most?

BBAUAN: Do you read your reviews even if they are unfavorable?

SD: No, reviews are for readers. By the time a book is published and in readers’ hands, my work is done and can’t be changed. I can only hope readers enjoy the story while I continue writing the next book.

BBAUAN: Is there a process for how you name characters?  Gideon is my favorite.

SD: I keep a list of names I come across that strike me, then when I begin a new story, I see if any of the names on my list suit the characters I’m getting to know.

BBAUAN:  Do you have any release day rituals?

SD: On release day, I’m usually on tour, so I’m away from home, living out of a suitcase. For the past several years, I’ve been up very early to prep for a live morning television appearance, often followed by either a launch event and/or book signing later in the day. This time around, I’ll be packed up and flying off to a different country by lunchtime. Interviews, travel, and appearances are usually a whirlwind for a few weeks before and after release, but I enjoy it. Meeting readers and talking about the book with them is something very special and I appreciate the opportunity.

BBAUAN:  Will you ever finish the Dream Guardians series?  Pleeeeeeease.  🙏

SD: Unfortunately, the third Dream Guardians book was never contracted by the publisher. Because of this, the series was orphaned. Most publishers are not interested in acquiring the last book in a series published by another house, so it’s remained homeless for years. I’m unable to complete the last book independently while I’m under contract, because publishing contracts typically contain non-compete clauses that prevent writers from working on other projects prior to meeting their contractual commitment. All of which is to say I’d like to complete the Dream Guardians, but I have no idea when I’ll be afforded the opportunity to do so.

BBAUAN: What’s next for you?

SD: I’ve been working on So Close, the first book in the Blacklist duology for the past three years. Family commitments have been a necessary focus of my life in recent years and doesn’t look to change any time soon, but I’m becoming better at finding a balance that protects my health, gives my family the attention needed at this time, and still allows me to work. Butterfly in Frost was a revelation and a relief for me, and I’m excited and energerized about giving readers their deeper introduction to Kane and Lily.

Teagan Ransom is a well-known reality tv plastic surgeon who has sold her practice, left Hollywood behind and upended her whole life to live a quiet existence.  She’s obviously traumatized and wounded but we do not know what happened to get her “here”.   Unfortunately for Teagan, her new neighbor is about to completely disrupt her solitude.

Garrett Frost is a very successful artist who has lost his mojo. He is tormented and broken.  He is also gorgeous, rich and used to getting what he wants and what he wants is Tegan.

Garrett moves in next door and almost immediately insinuates himself into Tegan’s life.  Despite her clear objections to the contrary – he persist.  As I’m reading I thought to myself WTH dude!  Pushy much?!  I liked him though – darn it – I like him!  Teagan has carefully constructed walls built around her life.  Soon she finds that he awakens hope and desire even as she thought those feelings were dead to her.  The sexual pull between them is irresistible.  We travel the ups and downs of their relationship to a twist that I did not see coming.

Is it possible for these two broken people to help heal each other?  Can they be each other’s safe place to fall?  Teagan doesn’t think so but Garrett has an answer for each one of her objections.

It has been MUCH too long since Sylvia Day released a book.  I was absolutely giddy to get my hands on Butterfly in Frost.  Fans of her writing know that she is a master at writing tortured alpha males.  Not to mention, sex scenes so hot that it’s a miracle the pages don’t spontaneously combust!  This story of love and heartache is the same but different.  Let me explain.  The subjects of loss, anxiety and depression are part of the plot.  They are handled with finesse and in a way that drew me in further.

The side characters, Roxy and Mike, are a hoot and a lifeline to Teagan.  We also get a cameo of sorts from Eva and Gideon though they do not affect the plot.  I stick got a kick out of it.  I enjoyed Butterfly in Frost but I was left wanting more.  A novella was not nearly enough for me and I wish it would have been a full length novel.

I hope Sylvia Day, at this very moment, is writing and that it won’t be another two years before we have another book from one of my all-time favorite authors.

About Butterfly in Frost

Teagan Ransom has finally settled in a place she can call home, spending time with new friends she adores, focusing on a fulfilling job, whilst reconciling the past and laying the groundwork for the future.

That is until Garrett Frost moves in next door. He’s obstinate and too bold, a raging and disruptive force of nature. Teagan recognizes the ghosts that haunt him, the torment driving him. Garrett would be risky in any form, but wounded, he’s far more dangerous. Tegan fears he could pull apart everything she has worked so hard to build, but Garret’s too determined…and too tempting.

Emotional and heartrending, Butterfly in Frost marks a brilliant return by global sensation Sylvia Day, the No.1 international multimillion bestselling author of the Crossfire saga.

Sylvia Day is the No.1 New York Times, No.1 USA Today & No.1 international bestselling author of over twenty award-winning novels translated into 41 languages. With tens of millions of copies of her books in print, she is a No.1 bestseller in 28 countries. Sylvia served as the 22nd President of Romance Writers of America and presently serves on the Authors Guild’s Board of Directors. Sylvia’s work has been covered in Time, Variety, People, The Wall Street Journal, Cosmopolitan, Associated Press, USA Today, and Entertainment Weekly.