“This trilogy is EPIC! If you loved TM Frazier’s King series, you MUST read the Perversion trilogy!”

POSSESSION, part two of the dark and gritty Perversion Trilogy

The story of Grim and Emma Jean continues.

War is on the horizon.

We’ll have to fight for what we have.

POSSESSION IS BOOK TWO IN THE PERVERSION TRILOGY

Holy crap!!! What just happened? Possession picks up right where book one Perversion left off. I’m in shock at the events that transpired. My heart is beating like crazy, the adrenaline rush is OMG!

Grim has loved Trick his whole life. Grim is a killer, but when it comes to his family/brothers we see him so differently. He’s all business; hard when it comes to taking down his enemies. He has seen Tricks walk away. She believes they can take Marco down! Marco is one sick puppy! Marco has helped these two psychos take Grim down with the one thing he holds dear to his heart! Trick is one strong cookie, she is resilient. She has been through hell but her will is breaking. Trick struggles with so many things!

A war is coming to Bedlam. Who’s going to live? Grim would throw his gauntlet down for Tricks. Everything is on high alert. Who can be trusted?

I love these two kids, who have been thrown into a life of hell. Each one in a gang, living only for survival. What a crazy, dark romance. It’s gritty and emotional. There were some special peeps in Possession who I hold dear to my heart. The cliffhanger has left me completely speechless! I really can’t wait for book 3. 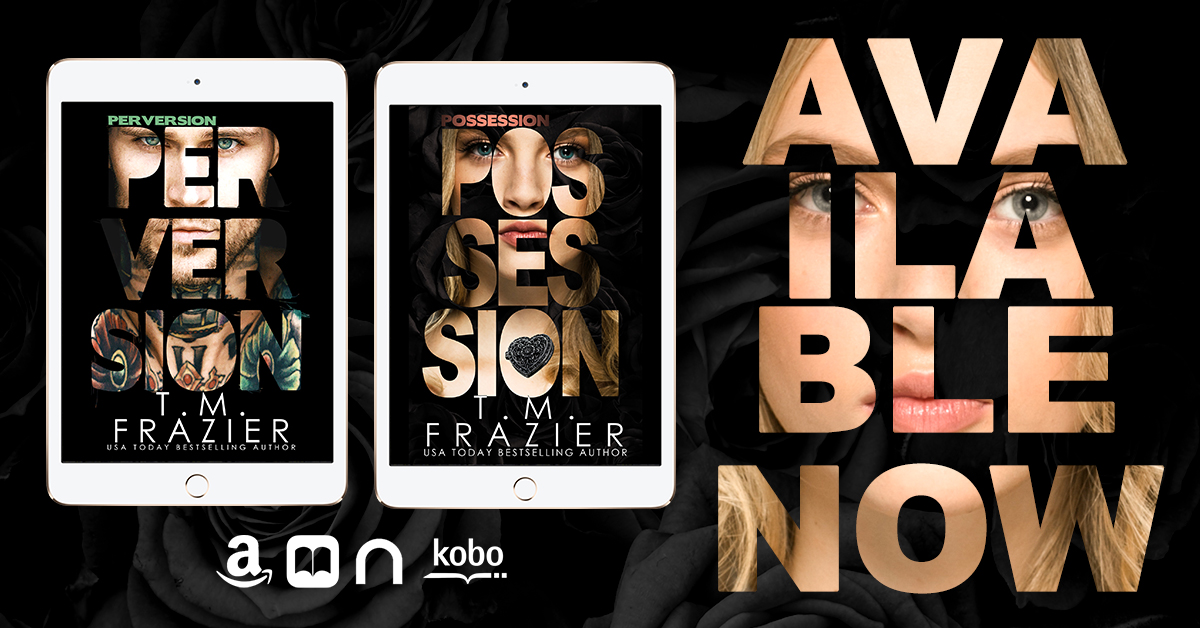 Start the trilogy today with PERVERSION

Bethany nods to the box, again pressing her finger to her lips. “We will know more when you’re assigned a judge. Until then, we will just have to wait,” she says loudly. She points with her eyes to the item in my hand, then leaves.

The object I’m holding is a rock with a piece of paper attached to it by a rubber band. I pull the paper free and flip it over. It’s a note.

Stay by the glass, motherfucker! Whatever you do, don’t turn around. PS-You look nice today. Prison blue suits you.

The one-piece scratchy uniform I’m wearing is bright orange. What the fuck is all this about?

I peer out from my cell. There’s no one in the room now. Not even the janitor. The security camera high in the corner across from my cell, the one that’s usually pointed directly at me, is now facing down toward the floor.

Whatever you do, don’t turn around. Okay, so I won’t turn around completely, but curiosity leads me to risk a glance over my shoulder. It’s just a wall. An empty blank wall. BOOM. BOOOOOM!

The sound resonates through my eardrums. I duck and cover my head with my hands as pieces of cement rain down into the cell. Dust coats my hair and the back of my neck. After a few beats, I stand, waving away the plumes of the aftermath.

Through the debris, I can just barely make out headlights. It’s a truck with a battering bar attached to the hood.

“All aboard! This train is leaving the motherfucking station. Literally!” shouts a voice. I can’t see who it is through the windshield which is shrouded in what remains of my cell. I don’t have time to ask any questions of the mystery voice.

There’s no time to question anything.

The passenger door flies open. Two officers appear behind me. One fumbles with the cell keys while the other shouts at him to move faster.

It won’t be fast enough.

I leap into the truck and slam the door. The tires spin in place for a few seconds until they finally grip the concrete. My head hits the headliner as we reverse over the broken bricks until we’re clear of them and are able to make forward motion. It isn’t until we’re through the field and on the road when I finally get a good look of my getaway driver.

Preppy may not be part of any official organization, but he runs a tight ship over in Logan’s Beach. Belly and I have worked with him and his friend King a few times in the past. I haven’t seen Preppy since before he was thought to be dead only to later be rescued from an underground cave where he was held captive for the better part of a year.

“Grim? Fuck, I thought I was rescuing Bear. Get the fuck out,” he teases. “Just kidding. If Bear was locked up I wouldn’t help him escape. That fucker could use some ‘me time’ to contemplate his grumpy nature.”

He holds the wheel with one hand and straightens his signature bowtie with the other. His white dress shirt is rolled up to his elbows revealing arms heavily covered with both tattoos and angry jagged scars.

He lights a joint and tugs on the wheel, making a sharp turn off the road into a dark heavily wooded area. When we’ve made it in far enough to be fully camouflaged by trees and brush, Preppy kills the engine.

He passes me the joint, and I take a much-needed hit, holding the smoke for as long as I can before slowly exhaling.

“Thanks, man. How the fuck did you get sucked into this?”

Preppy types out a text on his phone, then sets it back in the console. “Bethany. I owed her a favor. She got my boy, Bo, out of some trouble recently.”

“Isn’t your kid like ten now?” I ask. “What kind of trouble can a ten-year-old get into that needs Bethany’s kind of help?”

“He’s eight,” Preppy corrects. “And my boy catches the kind of trouble most kids his age don’t know is out there to catch. My girls are easier. Twin toddlers. Miley and Taylor. The three of them, along with their mama, are the loves of my fucked-up life. Bo’s a good kid. He’s just…well, his brain arrow doesn’t exactly shoot straight. Its target is usually more…”

Preppy shapes his hand like an arrow aimed at the windshield, then changes the aim to me.

“Human.” He drops his hand. “And the incident in question wasn’t that bad. It may or may not have had something to do with the unfortunate disappearance of a certain…”

He waves the rest of his sentence away like there’s a gnat flying around his head.

“Let’s just say he’s grounded. VERY grounded. For life. Or like a week. Minimum a few days. Or a day. Maybe, an hour or two. Poor kid. Maybe, I’ll just take him to the movies.” He sighs. “You’ll see. Wait until you’ve got some sex trophies of your own. You’ll understand.”

Kids. I’ve never thought of myself with a kid before. I picture Tricks holding a baby in her arms. Our baby. Much to my surprise, I don’t fucking hate it. Although, the thought isn’t helpful to my current situation and only makes me more impatient and enraged.

One thing at a fucking time.

Sirens wail through the night. Preppy remains cool and calm like he’s driving a parade float down main street, and not at all like he’s running from the law with a fugitive.

Blue and red flashes light up the woods. After a few seconds, the vehicles pass, and both the lights and sirens fade off into the distance. “That’s our bat signal. Let’s get you the fuck outta here so I can get home to the missus and eat her cookies.” Preppy pauses, probably realizing his odd choice of words. “I do actually mean cookies. Dre makes a mean batch of chocolate chip.”

I stare silently out at the passing trees.

“I’m going to eat her pussy, too. You know, after the other kind of cookies. Just so we’re clear.”

“Thanks, man. We’re clear. And if you ever need anything and I’m not dead or serving time, I’m there,” I assure him. I mean it. I owe him a debt. A huge one.

“Hhhhmmm,” he considers, taking the joint I pass him. “How do you feel about babysitting?”

I smile at his joke until I look over at Preppy only to see he’s not doing the same.

In fact, it’s the only time in my life I’d ever seen him with a straight face.

He looks straight ahead through the scratched and broken windshield. Bits of concrete from our escape attempt cover the dashboard, and some of it is lodged into the glass. “Never mind. You can do me one favor, though.”

“Anything within my power. It’s yours.”

“Don’t tell King about this,” he says. It comes out as a sheepish high-pitched question.

“Why? He wouldn’t want to know that you broke me out?”

King was a friend of Belly’s and a good ally to Bedlam. It wouldn’t make sense that he’d be against helping me. I’d do the same for any of them if the roles were reversed.

Preppy shakes his head. “Oh no, he knows I broke you out. I just sent him a text to tell him it’s over. The grand escape is complete.” He steps on the gas. “But he don’t gotta know I used his truck to do it.”

T.M. (Tracey Marie) Frazier never dreamed that a single person would ever read a word she wrote when she published her first book. Now, she is a five-time USA Today bestselling author and her books have been translated into numerous languages and published all around the world.

T.M. enjoys writing what she calls sexy‘wrongside of the tracks romance’ with morally corrupt anti-heroes and ballsy heroines.

Her books have been described as raw, dark and gritty. Basically, what that means, is while some authors are great at describing a flower as it blooms, T.M. is better at describing it in the final stages of decay.

She loves meeting her readers, but if you see her at an event please don’t pinch her because she’s not ready to wake up from this amazing dream. 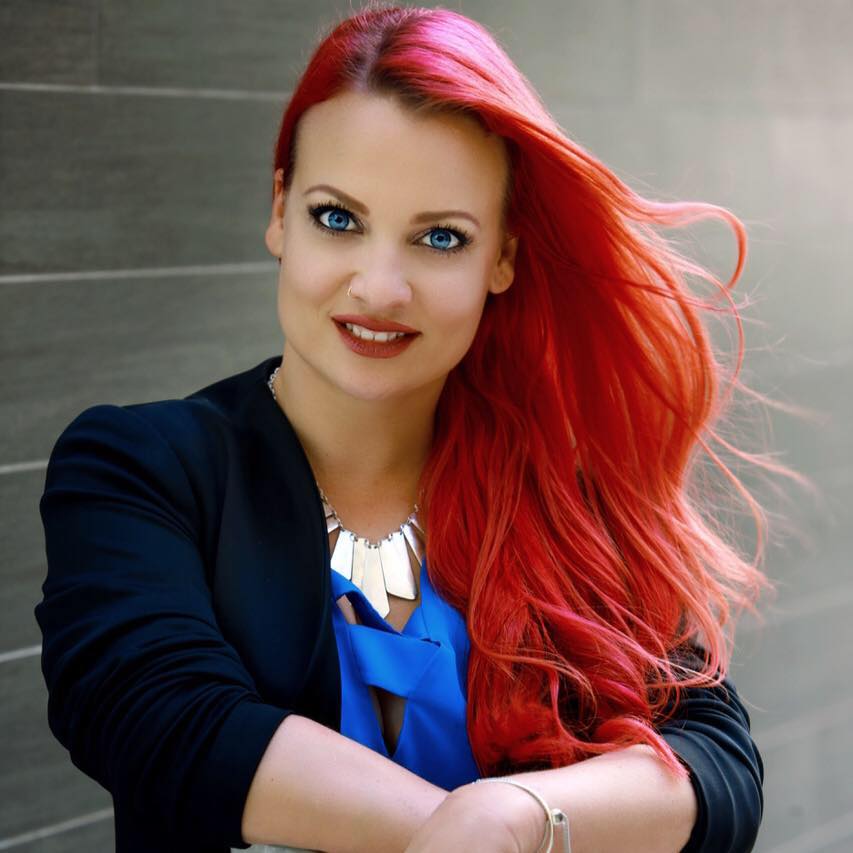