It seemed like a good idea at the time. Look up Landon Roderick, that boy from childhood whom I’d never been able to forget—even though he so easily forgot about me—and call him.

Then again, anything sounds like a good idea when you’ve had a little too much wine before bed, right? It was supposed to be just a quick, meaningless, prank call. Instead, I went off on him—unloading thirteen years of pent-up emotions.

I didn’t think he’d call me back.

I certainly could never have anticipated the weeks of sexually tense phone conversations that followed as I got to know the man he’d become.

Turned out, Landon had never really forgotten me, either. That special connection we had was still there. I opened up to him, but there were also things about me he didn’t know. And he had his own secrets.

Over the countless hours we talked on the phone, I wondered what would happen if we actually saw each other. One night, I did something impulsive again. Only this time, I went to the airport and booked a ticket to California. We were about to find out if one phone call could bring two lost souls together or if my drunk dial really was all just a big mistake.

Louisa’s 5 Blush Up All Night Review

Penelope Ward – are you a witch? How do you continue to write such riveting, unique and fresh stories that just suck me in and don’t let go? And side note – Girl – your book covers are so sexy and hot!

Rana and Landon…this couple was epic. Starting as childhood friends with a little crushing going on – until Rana’s abrupt departure.

Fast forward – drunk Rana, living just an ok life is feeling a little reminiscent of her friendship with Landon and just jumps online and finds his number. The conversation begins with some word vomit from Rana and Landon is just blown away with her call!

Landon and Rana’s friendship is a slow building fire. Their relationship is fun and quirky, and their whole story is just so unique. No insta-love, but a sweet friendship that turns into so much more.

“It was like he unwound all of our pain and sewed it back together into something beautiful.”

“You say the weirdest shit, and you’re a mystery…but you’re good for my soul, Rana.”

So much more to the story than two long lost friends who reconnect. This story is about healing and forgiveness. 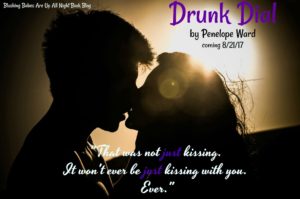 I was intrigued by the title… wouldn’t you be? Drunk Dial has become my new favorite Penelope Ward book. She nailed it!  Everything about this story will have you falling for Landon. We all have drunk dialed or have at least thought about it.

Rana Saloomi had to get something off her chest, but she got so much more! Rana is a loner by choice.  She has a guarded heart and a great sense of humor. Rana was always the geeky looking kid, but watch out!  Rana isn’t what she use to be!

Landon Roderick is no longer the boy next door.  He is all grown up. He’s a gorgeous, tatted, hottie with piercings.  Not what you would expect. He’s enjoying the life he’s finally found for himself, but when Rana reappears everything he’s built for himself changes!
I really liked both characters.  They were playful with one another. Heartfelt friendship. The story is different.  I think that’s what makes it so much more than what you expect. Landon is so sweet and swoon-worthy!  He’s definitely my new book boyfriend!  Penelope didn’t miss a beat writing this book.

Rana Saloomi had to get something off her chest, but she got so much more! Rana is a loner by choice.  She has a guarded heart and a great sense of humor. Rana was always the geeky looking kid, but watch out!  Rana isn’t what she use to be!

Penelope Ward is a New York Times, USA Today, and #1 Wall Street Journal Bestselling author of thirteen novels. With over a million books sold, her titles have placed on the New York Times Bestseller list sixteen times. She is the proud mother of a beautiful 12-year-old girl with autism (the inspiration for the character Callie in Gemini) and a 10-year-old boy. Penelope, her husband, and kids reside in Rhode Island.

Other standalones from Penelope Ward: