Blog Tour ~~ Until It Fades by K.A. Tucker 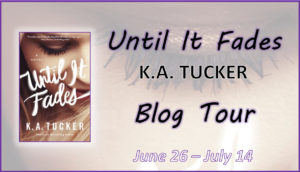 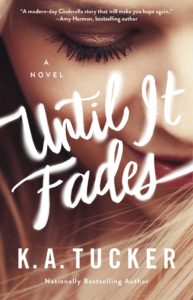 ABOUT UNTIL IT FADES:

Twenty-four-year-old truck stop waitress and single mother Catherine Wright has simple goals: to give her five-year-old daughter a happy life and to never again be the talk of the town in Balsam, Pennsylvania (population three thousand outside of tourist season).

And then one foggy night, on a lonely road back from another failed date, Catherine saves a man’s life. It isn’t until after the police have arrived that Catherine realizes exactly who it is she has rescued: Brett Madden, hockey icon and media darling.

Catherine has already had her fifteen minutes of fame and the last thing she wants is to have her past dragged back into the spotlight, only this time on a national stage. So she hides her identity. It works. For a time.

But when she finds the man she saved standing on her doorstep, desperate to thank her, all that changes. There’s an immediate connection, and it’s more electric than the bond of two people who endured a traumatic event. It’s something neither of them expected. Something that Catherine isn’t sure she can handle; something she is afraid to trust.

I loved this story! The slow build up is almost torturous! The story is not rushed. The writing flows from one chapter to the next alternating between the present and the past.
Catherine Wright is doing the best that she can to get by. When Catherine (Cath) was young she made some bad choices. Living in a small tourist town made those choices even more difficult for her and her family. She became the gossip of the town, the villain.
Fast forward to the present day, Cath likes living a quiet life, working hard and being the best mom she can be to five year old Brenna. Working as a truck stop waitress, pushing through all of life’s daily challenges are nothing new to her. But now, she is faced with the biggest challenge of her life….
On a dark foggy night Cath is driving home and comes across a horrible car accident. She attempts to pull the victim out of the mangled car and eventually saves the man’s life! My heart was beating out of my chest as I read this scene! Little does Cath know, he is not just any man, he is Brett Madden, hockey superstar and son of the world famous actress Meryl Price!
Years of mistrust, guilt and shame keep Cath from wanting to come forward and be exposed as the hero who saved the famous hockey player. She is afraid that the media will bring up her past and she will once again be the talk of the town only this time she has her five year old daughter to consider. She doesn’t want her hearing about her mom.  Cath is able to hide her identity for a short while.
“What can they say that hasn’t already been said?”
“Consider this your second chance. A way to redeem yourself, if you feel you need to.”
Brett Madden feels an immense amount of gratitude for the person who saved his life.
“It was a woman who pulled me out of the car before I burned to death, and I would really like to thank her in person…..”
The emotions are everywhere! The story also has few twists here and there. I very much enjoyed it. The characters were well developed. There is so much more to this story than the accident but I don’t want to spoil it! I also adored Cath’s daughter Brenna! Such cute interactions with her!
I am a huge KA Tucker fan! I was not disappointed. If you haven’t read any of her work I would highly recommend Ten Tiny Breaths. It was an amazing series and remains one of my favorite reads.

K.A. Tucker is one of my favorite authors of all time.  I go nuts when she finally releases one of her incredible books!  I have to say though, Until It Fades fell flat for me.

What I love about K.A. Tucker’s books is that no matter what it’s about I literally LIVE her characters and their stories because they are so deeply told.  Until It Fades never dove deep for me.  It never commanded my attention.  And I’m sad about it because it was written well!  Anything she writes is written extremely well, however the story itself was mediocre and bland.  I’ve heard this story before and it’s so unlike her.
Catherine is a great character, full of kindness, motivation and strength.  She’s brave and fierce and I enjoyed her.  But Brett Madden didn’t give me the feels.  He’s sweet, of course, and protective and all things MAN, but I just couldn’t grip their chemistry.
I will ALWAYS read the lovely and uber talented K.A. Tucker.  And her stories are always AMAZING, but Until It Fades was just GOOD this time around.

K.A. Tucker is the author of He Will Be My Ruin and the Ten Tiny Breaths and Burying Water series. She currently resides outside of Toronto with her husband, two beautiful girls, and a Chug.

UNTIL IT FADES by K.A. Tucker