Blog Tour: THE UPSIDE OF LETTING GO by Nacole Stayton Haley Martin decides the only way to let go of her lingering nightmares is to literally move on. Taking a leap of faith she finds herself enrolling at a campus hundreds of miles away from home.

She leaves any thoughts of dating again in Jersey, that is until fate crosses her path with a blue-eyed stud named Kyler King. He is notoriously known for being emotionally unattainable, but his façade is only to hide the burdens he bares every day.

As Kyler and Haley’s physical attraction becomes deeper, the secrets of the past threaten to surface. When Haley’s past collides with the present, will her secrets prove too big of an obstacle hindering their happily ever after, or will letting go be the key that locks their bond forever?

Warning: This book is intended for readers 17+ due to explicit language and sexual encounters.

Oh Haley, you just feel for this girl, she has a traumatic past but is edgy and strong despite of it. She winds up in Alabama running from her past.  She meets Kyler, and she knows that he is a bad boy that she should stay away from until she finds out that his past is all to similar to hers.

Together they fall deeply in love with each other.  It is also in falling in love that they learn to let go of their grief.

This is a quick sweet read.  The writing style flows nicely and the book moves at a good pace.  There are plenty of surprises.  Its one of those books that in the end just makes you feel good that things worked out the way  they were supposed to.

Beautiful, touching, heartfelt story. One of making new starts and learning how to accept the past and move on in order to allow the future to be possible.

Haley is on the run from her past. She heads off to a new college to start over and she immediately runs into Kyler on her first day on campus. Kyler is seen as a player with the girls as well as on the football field. But he too is also running from some of his own demons. He’s not someone Haley is not looking to have in her life. Ironically, much of their lives mirror each other. Nacole Stayton did a beautiful job of involving me in Haley’s and Kyler’s lives, their pain, and their need to let go of the past in order to move forward.

At first, it seemed that maybe Kyler and Haley were moving very fast into a relationship but in reality, it was just right for them. They are two souls broken, that together make a whole. You could feel the love between them. Then the past and more tragedy show up at their door. Geez, can these two ever catch a break? I was broken and hoping to be put back together again.

I loved Nacole’s ability to engage me in their lives. I was fully immersed with Haley and Kyler and their family and friends. What a wonderful story reminding you how to rewrite your future. 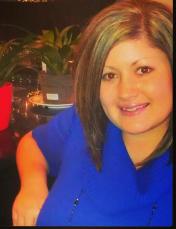 Nacole Stayton was born and raised Christian “Nacole” Stayton. She is twenty-three years young and currently resides in the Bluegrass state, Kentucky. She spends her days working at the local hospital and nights writing vigorously on her current novel. She has a passion for helping others and wears her University of Kentucky gear proudly. While her husband loves all things outdoors Nacole enjoys the finer things in life like getting pedicures while reading on her Kindle Fire. Her hair color changes with the seasons and she has a weakness for tattoos and iced coffee.