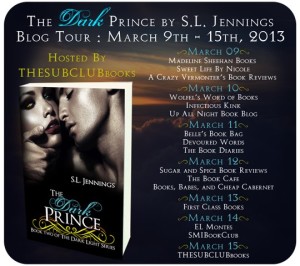 Abby and Dawn here from Up All Night! Today we bring you an interview with Aurora, that girl we love to hate, from The Dark Light Series.

UAN: Aurora…Thanks for taking time out of your busy schedule to join us here at Up All Night. We have so many questions for you and can’t wait to get all the juicy (yeah, we’re totally thinking about Dorian and Jared!) details from your perspective about what’s going on with Gabriella, Dorian, Jared and you…

Aurora: Sure whatever. *flips hair*

UAN: Let’s start with Gabs – what was your first impression of her?

Aurora: *rolls eyes* Really? I’m nice enough to come do your little interview & that’s the first question you ask me? Why the hell would I want to talk about her? I thought this was about me.

Aurora: Ugh! Fine! My first impression? In one word…Cheap. She isn’t worthy of Dorian. Hell, she isn’t even good enough to scrub his toilet.

UAN: (Wow – seriously, how did Dorian ever like this chick??) Gabs leaves a scent on people, could you smell her on Morgan before you invited Morgan to the salon opening?

Aurora: Well- if you really must know- my kind has the ability to mask our identities. In turn, we cannot sense other beings around us. In social settings, it’s imperative that we do just that.

Aurora: Afraid?! Are you serious? Ha! Afraid of some little second-rate tramp? Oh my God, how dumb are you girls?

UAN: *Dawn looks at Abby* (What a slore!) Do you think you could take her in a cat fight? Or would you just fight dirty?

Aurora: I don’t do cat fights. And I don’t have to fight dirty when she & I come to blows. Anything pertaining to Gabriella is dirty enough.

UAN: *rolls eyes* How did you feel when you opened the door at Dorian’s house and Gabriella was on the other side of it?

Aurora: How did I feel? How do you think I felt? I wanted to slap that smug look off her stupid little face. And she better be happy Dorian was there or that is exactly what would have happened.

UAN: Um, hmm…All right, let’s take on the sexy-ass men in your life:

UAN: Jared, do you actually like him (mmm…sure sounded like it when you went away for the weekend) or are you just using him (like we want to!) to make Gabs angry?

Aurora: Jared was a happy obligation. I was told to watch him closely. The way he devoured me was as close as close could get. Pissing off Gabriella was an added bonus.

UAN: Dorian, was he really your first time? (Nope, we don’t pull any punches!)

Aurora: Of course he was! I am not like that little tramp! I was his first as well. And you always come back to your first love.

UAN: *rolls eyes* (She’s so delusional…) Who would you compare Dorian to if you had to pick someone well-known?

Aurora: There’s no comparison. But if I had to pick… Ian Somerhalder is the obvious choice. But I assure you, Dorian is much hotter than Ian. Not to mention, he has the body of a god.

UAN: Um, hmmm…that he does! Give us a moment…

UAN: When you and Dorian were together was he as insatiable as he is with Gabs?

Aurora: Whatever. Nothing can compare to what Dorian and I had. She is a plaything. A toy. A little girl who doesn’t even know what the hell she is doing. Dorian will never forget how amazing it was between us. He’ll never be done with me. You’ll see.

UAN: Yes, we’ll see…Let’s wrap up with some speed round questions:

Aurora: Um, hello? Do you see my body? That in itself is inspiration. But I do love Alexander McQueen, Alice + Olivia, Dolce & Gabbana, and Chanel. Anything looks good on me.

Knows best how to make a girl scream: Dorian or Jared? (Feel free to share any details)

Aurora: Believe it or not, Jared is quite capable in that department. He’s very…blessed, if you know what I mean. He definitely knows how to please a woman. But what Dorian and I share is indescribable. He knows exactly where to touch me. Where to kiss me. He knows how hard I like it. He knows when to slow it down and be gentle. And he doesn’t stop until I scream for mercy. The man is a machine.

Aurora: Ugh, neither. I am more of a champagne girl. But if I have to choose…vodka.

Bed or against the wall?

Aurora: Anywhere Dorian wants it. He’s fond of both, by the way.

UAN: Thank you, Aurora, that’s all we have time for today. Anything else you’d like to add?

Aurora: Payback is a bitch. But I’m an even bigger one.

UAN: Wow – took the words right out of our mouths…

And now, Up All Night brings you Aurora’s POV from what we thought as one of the most heart-wrenching scenes in The Dark Prince…when Dorian ‘breathes’ Aurora…

Tonight Dorian would be mine. And there was nothing that stupid little slut could do about it.

I let myself into his suite, not even bothering with knocking. He knew I was here; he always did. No one knew my body like Dorian did. His lips had tasted every inch of me inside and out. He had infiltrated the dark desires in the furthest corners of my mind. I had submitted to him in every way. I was his, and he would always be mine.

I spy him by the French doors, drawing strength from the night. A piece of my cold heart thaws at the sight of his weakness. Of course I want to help him, and I will. But tonight isn’t just about that. Tonight is about taking back what’s mine.

“You’re early,” he says without turning around to face me. He takes a sip of his favorite single malt scotch. I know it’s his favorite because I was the one who introduced him to it. That’s something only he and I share. That…girl…would know nothing about that.

I make my way into the room, stopping only a foot away from his broad back. “I needed to see you. To ensure you were ok.”

I hear him let out a breath. “You know I’m ok, Aurora.” Dorian finally turns his face to me, giving me a glimpse of his exhausted, yet beautiful, face. His mouth turns up a fraction before settling into a semi-scowl. He shakes his head. “But…thank you.”

“Of course,” I smile. “You know I care about you. I don’t want to see you like this. It breaks my heart.”

“Heart,” he snorts with a weak laugh. “Don’t pretend you have one of those.”

A beat passes before we both fall into a seamless chuckle, our laughter ending only when our eyes lock. So much history. So many words left unsaid. So many memories that will be etched into our souls for eternity. Forgetting your first love is like forgetting an appendage. We are a part of each other, whether Dorian wants to admit it or not.

“Dorian, I…” I take a deep breath and gather my thoughts. He needs to remember how he felt about me. Feelings like those don’t just die. I take a step towards him, placing a hand on his chest. He doesn’t shrug it off so I take another step forward, close enough that his intoxicating scent consumes me.

“I know, Aurora,” he murmurs. “But it doesn’t change anything.”

“Why not? Why can’t we go back to what we had? We were happy together. You remember. Don’t tell me you didn’t care for me like I did you. Like I still do.”

“That was the past,” he says, turning back towards the window. “We should keep it there.”

I resist the urge to grasp his shoulders like I had done so many times while Dorian made love to me. I can almost feel his body on top of mine. Can almost hear him whispering my name as he dug deeper and deeper. I have to make him remember how good we once were. And forget that miserable tramp that keeps trying to weasel her way into his life.

“Dorian, don’t shut me out. You know I had no control over myself that night. And if I could do it all over again, I would. Please…” I reach out to brush the back of his neck, his soft, black locks falling over my fingers. “We need each other.”

He lets out an exasperated breath and shakes his head. “No, Aurora. I need her.”

Three quick raps on the door drive his words deeper into my chest. I bite down on my lip to squelch the urge to scream before spinning on my heel to let in Dorian’s little tramp.

Fine. I’ll let him believe that it’s her that he needs. But tonight, there will be no question that it is me that he desires. And when I’m done with him, even that stupid whore won’t be able to deny it.

Check out our review of THE DARK PRINCE here