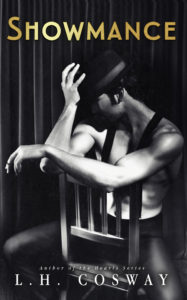 Damon Atwood was Hollywood’s golden boy. Having won an Oscar at the tender age of thirteen, he had the life many could only dream about. But his success came at a price, and after a short but fruitful film career, he chose to live a life of obscurity on a remote Scottish island. Almost a decade later he’s finally ready to make his return, starting with a lead role in a musical on London’s West End.

As a choreographer’s assistant, Rose Taylor has always faded into the background. She watches shows come to life from the side lines, but has never craved the attention of stardom. When rumours begin circulating of Damon’s involvement in her latest gig, she doesn’t predict how she will be thrust into the limelight, nor how the mysterious and strangely introverted man will need her to teach him how to be a star again.

Rose knows that show crushes don’t last. Actors fall for each other during the intensity of a production, often losing themselves in their roles. These kinds of affairs burn bright and then they fade. The question is, should Rose let herself shine with Damon, or guard her heart from being broken after the final curtain call? 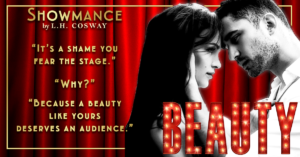 Straight up. This book was amazing.

I have always loved books and movies that are set against the backdrop of something big, like a theater production or a grand opening. I love the energy that happens behind the scenes. I love the romance that is sparked because of the passion and commitment to the something big. I love the big reveal of the something big and how often the main characters get an unexpected opportunity to shine in the spotlight.

Showmance is an awesome example of all of that. Set against the rehearsals and production of Moulin Rouge, Showmance tells the story of two people who come out of their shells and comfort zones to put themselves out there for all to see. Damon Atwood is a child actor turned recluse. After the death of his grandmother, he is moved to accept an opportunity to play the male lead in a stage production of Moulin Rouge. Having absolutely no stage experience, Damon is a bit out of his area of expertise. He can act. He can sing, but he cannot dance. Enter choreography assistant, Rose Taylor. Rose is a truly gifted dancer who has always been more comfortable in the role of choreographer than principle dancer. When Rose realizes that sexy Damon Atwood can’t dance she finds herself overcoming her fangirl behavior and offering him dance lessons. Damon readily agrees and the sparks start flying!

And oh, how they fly! I would be completely lying to you if I said I was unaffected by Damon and Rose’s sexual attraction. From looks across the dance studio to near kisses, I was in a constant of state of swoony, fanning myself butterflies. No joke. I had to put the book down, so I could regroup and lower my blood pressure, and they hadn’t even gotten busy yet!! I was also affected by their willingness to trust and share their vulnerabilities with each other. Now, it wasn’t all smooth sailing getting to that willingness, but the effort and desire to share was there. It was so nice to see how they filled in each other the holes left by others. They were friends, first and foremost, with a healthy helping of sexual attraction!

I’ve read L.H. Cosway before and have really enjoyed her work. I have loved reading the books she’s co-authored with Penny Reid. L.H. Cosway writes stories of unique individuals who really are like most of us., beautifully flawed and wonderfully imperfect! 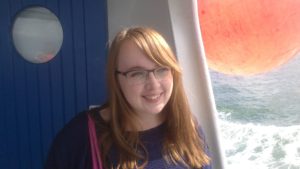 She thinks that imperfect people are the most interesting kind. They tell the best stories.