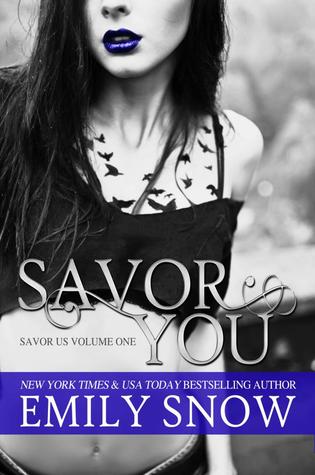 Kylie Wolfe and guitarist Wyatt McRae have been bad for each other for the last several years, but it’s impossible for them to end their toxic push and pull. Not when their attraction is constantly fueled by lust and proximity—she’s her older brother’s Lucas’s assistant and Wyatt is his best friend and band mate.

So when Your Toxic Sequel makes a move to record a new album in Nashville, Kylie decides to make the latest break with Wyatt official by getting the hell out of town. She’ll spend a week in New Orleans. A week to immerse herself in the Mardi Gras scene. One week to not think about the last time she was in New Orleans, seven years ago with Wyatt. Seven days where she won’t have to see Wyatt every day just to fall ridiculously in love with him all over again—where, if she wants to, she can have a normal, no strings attached fling that won’t end in heartbreak.

Too bad Wyatt ruins everything by showing up, as gorgeous and demanding and goddamn awful for her as ever.

Wyatt refuses to let Kylie give up on him. Not without reminding her why they both fell so far and hard in the first place. Not without making her savor the good memories and what could be their last chance with each other.

Note: This is a spinoff from the Devoured series.

We are honored to have Emily share some time with us on Up All Night Book Blog!!! As SAVOR YOU and the DEVOURED series are heavily tied into music, we wanted to find out from Emily more about this. Take a look…

UAN: Kylie is the personal assistant to her brother Lucas and is very involved in the music scene. Has music always been an influence in your life? And what bands or singers have impacted you the most and why?

Hey ladies! First, thanks so much for being a part of the Savor You blog tour and for having me on your site today—I’m very excited to be here!  I’m pretty stoked to be blogging about one of my absolute favorite topics today, too. Talking about music tends to bring out a giant grin that’s impossible for me to suppress!

All of my earliest memories involve music. Regardless of the genre (and I seriously find something that I enjoy listening to in every single category), I’ve always looked to music to express my feelings. I have several “go to” songs on my playlists, such as the sad songs (System of a Down’s “Lonely Day”) to the music that takes me back to high school (“U Got It Bad” by Usher). I’ve also got a healthy dose of groups like H.I.M (if you haven’t heard their cover of Chris Isaak’s “Wicked Game,” go listen now—it’s amazing!) and Regina Spektor and Ellie Goulding.

When it comes to bands and singers that have impacted me the most, the first one that comes to mind for me is Incubus. In Savor You, Kylie is crazy about Chevelle’s music, and I’ve got to admit that I feel that exact same way about Incubus. I didn’t start listening to their music until I was in high school. “Drive” started playing on a mainstream radio station that I listened to quite a bit and the moment I heard it, I knew I had to find more from the band. Incubus has this way of really getting under my skin with the emotion behind their music and the lyrics stay with me for days. My all-time favorite Incubus songs are “Drive” and “Love Hurts.”

I’m also a HUGE fan of Sia. Her music literally gives me the shivers. It’s moody and sexy and her voice is so effing incredible. I started listening to her several years ago by accident. Britney Spears (yeah guys, I’m a Britney fan, too!) came out with a song called “Breathe On Me.” I bought what I thought was the single from iTunes only to realize that I purchased “Breathe Me” by Sia instead. The thing is, as soon as the first few measures of that song started playing it was impossible for me to stop listening. It was just that beautiful. Sia’s music forces me to feel emotion after emotion, and I love it.

For the last few years, I’ve really gotten into Halestorm and In this Moment’s music. Lzzy Hale (Halestorm) and Maria Brink (ITM) both have voices that are out of this world, and I absolutely get lost in their bands’ music. Out of all of the groups on my favorite’s list, Halestorm and In This Moment shows up the most times on my writing playlists. Their music is angsty, hot, and catchy. I’ve been known to stand in the grocery store checkout line humming Halestorm’s “I Miss the Misery” or ITM’s “Adrenalize!”

I have a few additional artists and groups that have also made their way to my list, including Three Days Grace, Death Cab for Cutie, Ed Sheeran (HE IS AMAZEBALLS), and P!nk, but the artists above are the ones that I constantly find myself going back to. 

Thanks again to the wonderful ladies of Up All Night for having me and for giving me the opportunity to blog about music! You ladies rock! 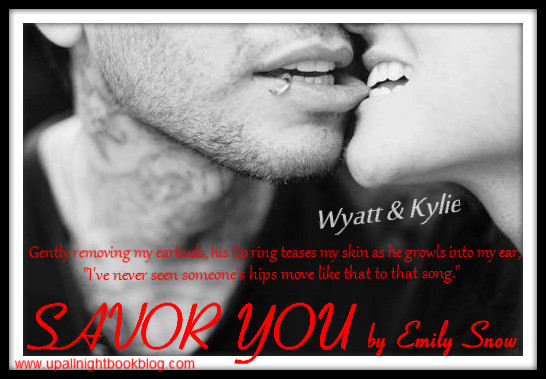 Kylie and Wyatt have an explosive, passionate, and long history together. This is patently obvious based on all the heartbreak and pain they have caused one another as well as the passion they share. They have been in an on and off relationship as friends with benefits for the last seven years and Kylie is now ready to let it go. But Wyatt is not ready to let her go. And wow, those are some hot, sexy scenes between them!

This story slowly unravels pieces of their history together as they travel cross-country, stopping at points along the way where memories lie. They are like two magnets drawn to each other and I could sense their intense need for one another. Kylie is a strong woman and Wyatt is her kryptonite. What I loved about their craving and need for one another was how Emily Snow wrote it. It was so sensual and intense.

And I loved the secondary characters like Kylie’s best friend, Heidi, and the banter between her and Cal, another band member. They added a fun, lighthearted element to the story.

One thing I would have preferred was to have read the Devoured series before. Although this is a standalone story that is based on characters introduced in the Devoured series, I feel like I might have missed some of the character development of both Kylie and Wyatt by not having read those books first which may have made this a richer experience for me.

Overall, I definitely want to read the next one to see how the rest of their story plays out.

I have not read the Devoured series, in fact while reading this I was unaware that this is a spin off.  Which is nice because you don’t have to read the other books to understand what is going on here.

Kylie and Wyatt are damaged and interestingly crafted characters. Kylie is her brother Lucas’s personal assistant for his band.  For the last eight years Kylie has had an on off, mostly off thing with Wyatt.  Wyatt comes after Kylie.  He is extremely sexual and you can feel the heat.  The writing in the sex scenes is smoking. There are some major toe curling moments.  From the first chapter it was clear that this was going to be hot. Wyatt has an I’m not going to take any crap kind of attitude and it is both sexy and refreshing that he won’t let Kylie push him away as easily.

I did feel that this was a little too quick of a read.  I would have liked some more insight as to why Kylie was as messed up as she was.  For me this almost felt like a novella.  Maybe it was just such an easy can’t put down read that I breezed through it that fast.  I’m not sure.

She loves books, sexy bad boys, and really loud rock music, so naturally, she writes stories about all three. 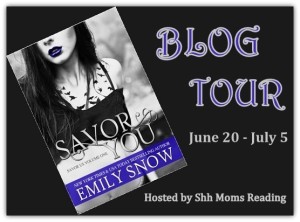