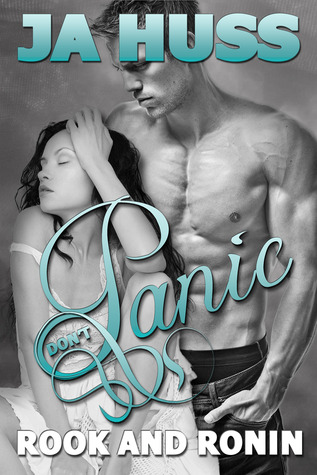 Rook is chasing her dream—film school and a chance at a life beyond the one she ran from six months ago. But before she can become the girl she wants to be, she must deal with the girl she left behind.

Lies, secrets, and shocking truths will rock the foundation Rook and Ronin have built. Can they put the past behind them and move forward together? Or is this just another too good to be true relationship that will crash and burn in the end?

My initial reaction to the first two books, was that I was not 100% sold on Ronin.  I felt like Rook was sort of still being taken advantage of.  I was messaging Dawn, saying I thought these were books that a lot of people would have some controversy with them.  I liked the way Tragic and Manic were written, but in a way I felt like no one had Rook’s best interest in mind.

So this book, Panic, completely sets every concern I had at ease.  It is easily for me the best of the three books, and an amazing conclusion.  I found myself highlighting, but not for lines, I was highlighting different things that I thought could be significant.  You as the reader knew that some twist were going to happen but you have no idea what those twist are going to be.  At 85% in I messaged Dawn: My jaw just hit the ground!  And I’ll tell you what, that was not even the last surprise, J. A. Huss continued to keep me on my toes until the very last line of the epilogue.

Sometimes when a trilogy ends you are left feeling sad that it is over.  This was more like getting off a really fun rollercoaster ride, you wouldn’t mind doing it again, but you can appreciate the thrill that the whole thing took you on.

Holy crap! What a perfect conclusion to the Rook and Ronin series!! Each book sucessively improved and Panic was an absolute 5 star read for me. If you haven’t read the first two, I would definitely recommend reading them before diving into Panic. This picks up right where book 2 left off and once I started, I didn’t want to put it down until it came to the very last moment of the epilogue. And even then, I was screaming ‘nooooo, don’t leave me like that!!!’. I immediately started messaging J.A. Huss wanting to know when she would put me out of my misery (a sweet one, anyway!) and hand over the next book. By the way, January cannot arrive fast enough for that story…

Anyway, back to the rest of the story. This had elements of danger, pain, love, family, friendship, unrequited love, forgiveness, and so much more. I couldn’t tun the pages fast enough and I think I held my breath through quite a bit of it. Without going too much into the first two books, this book was just what I needed to see for Rook. Although she questioned some of her choices, I saw her growth and acceptance. And had her finding a sliver of peace in her crazy, mixed-up world.

Let’s not forget about the men in Rook’s life – Ronin, Spencer, and Ford. Although I had moments where I wondered what Ronin’s motive was, I still fell hard for him and his commitment to Rook and his friends. I seriously loved his sexiness and being in Ronin’s head throughout the story. Spencer, sexy as ever, a biker with a heart of gold and truly someone who Rook needed at critical moments. There was one scene with the Shrike Bike pictures that just made me swoon and love Spencer even more. And then there’s Ford. Fucking Ford. Straight-up, I love Ford, in an “I want to know his secrets and unravel his mysteriousness” kind of way. And damn if he didn’t just command your attention. Whew!

J.A. Huss delivered a story that had me finding every opportunity to read it until the very end and even afterward had me thinking about the story and jittery for the next!

And a side note: This was a buddy read for me with my blog partner, Abby. I had to laugh when I looked back at some of my messages to Abby:

And the ending for us:
Abby: I’d like a Spencer story
Me: I am kinda hot for Ford 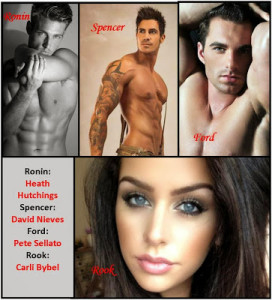 He leans in and kisses me, sliding my zippered hoodie down my arms and letting it drop to the floor. I never know what I’m in for when he gets in the mood. Sometimes he acts like he’s starving for my lips, desperate and wanting and rough. Then other times it’s like he’s afraid of breaking them, that’s how soft and tender he is.

I like it and I kiss him back just as tenderly, our tongues twisting together as he lifts up my shirt. He pulls back for a moment to slip it over my head and then resumes the kiss as the shirt is discarded. One hand cups my breast and then reaches behind to get rid of my bra while the other one unbuttons my jeans. “Kitchen or living room?” he breathes into my mouth.

“Right here,” I reply as I lift his t-shirt up—dragging my palms against his muscular back—clear his head and drop it in the pile of clothes at our feet. He pushes me a little until I take a step back. The back of my knees bump up against the leather couch and I am forced to sit down, coming eye to eye with his hard thickness through his jeans.

I smile up at him.

He smirks down at me.

I go for the button on his jeans but he gently takes my hands and pushes them away. “No, Gidget. Not tonight.” He pushes me back on the couch, unzips my pants, grabs them by the belt loops, and pulls them down, taking my panties with him.

He looks down on my naked body with hunger. Like he’s never seen it before. He licks his lips and kneels down.

“It’s present time,” is all he says as his head dips between my legs. He lifts one leg up and pushes it towards my shoulder and his lips find the dent behind my knee.

I laugh when he sucks and nips the tender skin there, and then arch my back because holy fucking shit, I had no idea that spot was so, so, so… erotically sensitive.

Facebook * Twitter * Goodreads
Find me here: http://www.newadultaddiction.com/JA Huss is a SF and new adult romance junkie, has a love-hate relationship with the bad boys, and likes to write new adult books about people with real problems. She lives with her family on a small acreage farm in Colorado and has two donkeys named Paris and Nicole. Before writing fiction, she authored almost two hundred science workbooks and always has at least three works in progress. Her first new adult romance is called TRAGIC.