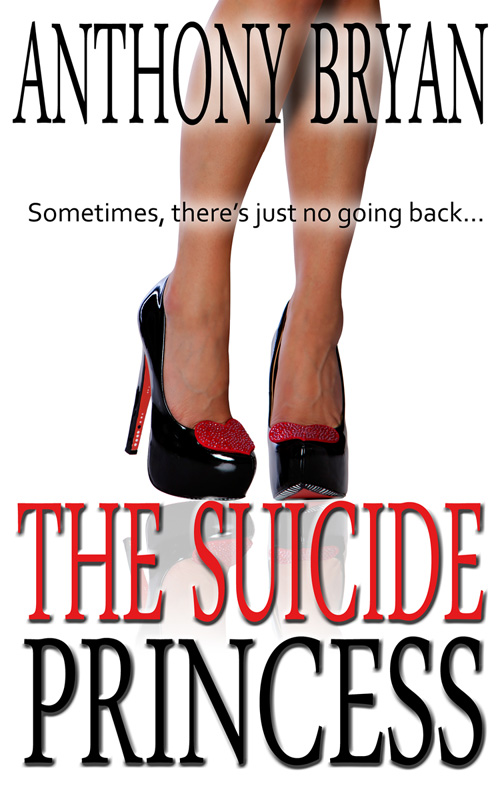 Stephanie Bradford is a young, attractive, and successful District Attorney on her way to the top. She has the near-perfect life, with an amazing husband, and she has it all in the palm of her hand. When her marriage falls into a romantic rut, Stephanie is skillfully swooned by a charming, mysterious and intriguing stranger who looks to be the answer to all of her fantasies. A whirlwind and erotic affair quickly spirals out of control, and before long, she learns that things aren’t always as they appear and people are rarely who they seem. One poor decision becomes the catalyst for a series of events that rips her life apart, and Stephanie is left with nothing but the thirst for revenge against the man who viciously stole everything from her. The Suicide Princess is a sexually charged roller coaster ride where nothing is as it seems and everything is at stake!

Hi Anthony! Thank you for joining us at Up All Night Book Blog! We appreciate you taking the time to be here chatting about The Suicide Princess and your writing.

This is your first published book. For those less familiar with The Suicide Princess, how would you describe it to them?

I would describe it as a heart attack thrill ride in a bottle. Any time I write, it’s all about grabbing the reader’s emotions and hitting them hard. The emotions I am going after in this story are suspense, angst, intrigue, a little anger, and a whole lot of something naughty. It’s basically a romantic thriller and a naughty erotica slamming into each other at 100 mph!

You’ve been reading since you were a young child. What are some books that were favorites or authors who inspired you as a writer?

I actually read in genres that are completely different than what I write. I’m kind of a closet nerd, and my reading totally reflects that. My favorite book of all time is The Universe in a Single Atom by The Dalai Lama — I told you I was a dork!

No, just honest! What inspired you to write your first novel and this story in particular?

I’m not sure exactly what inspired me to write this story in particular, but my writing in general was spawned from my time in Afghanistan. Anyone who goes to war witnesses a lot, and deals with a lot when they come home, and writing was one way for me to kind of make some sense of the things I had experienced. It just grew from there.

In writing your story and publishing it out into the world, what are some things that surprised you about the publishing and writing process?

The biggest surprise was how busy this would get. I thought it was just write a book, put it for sale, and it all happens on its own after that. Writing was the easy part, marketing and promoting is extremely difficult.

The Suicide Princess is a twisted story with some unexpected turns. Are you a writer that plots everything out so you know exactly what happens or are you a fly-by-the-seat-of-your-pants author?

I almost always fly by the seat of my pants. With The Suicide Princess, I had a plot planned, but the end result was barely recognizable compared to the original plan. With that said, though, I love the way it came out!

Out of all the characters in The Suicide Princess, was there one that was more challenging to write? Easier to write? And why?

Stephanie was extremely difficult to write. She’s the kind of girl you love and hate at the same time. You can feel for her, and even understand what she’s going through, but at the same time you HATE what she’s doing. It was tough to get that just right so the reader shakes their head at Stephanie but without completely hating her. I think a lot of women will see a bit of Stephanie’s situation in their own lives – even if they won’t admit it 😉

Is there any part of the book that is more ‘you’?

Jacob and Derrick are 100% me… Jacob is my “nice guy” side, and Derrick is my “bad boy” side. And Derrick’s cocky-but-funny and take-charge demeanor are all me.

Haha! Love it! In your bio you indicate you are embracing your full name and not going the route of the authors with double initials as a first name. Do you feel that being a male author in a genre written predominantly by female authors has made your experience as an author different? And if so, in what way?

I honestly believe that no matter what you do, always innovate not imitate. Take the road less traveled, blaze your own trail, and climb your own mountain. It’s much harder that way, but in the end, you can stand upon something you, and you alone, built through hard work and tenacity, and you can be proud of what you’ve done. I can’t say that being a male author has been a huge challenge, but I do know a lot of readers look at a male author with suspicion in this genre…. But I LOVE a challenge!

If you had to pick a celebrity that your characters resembled who would it be?

I’m asked this a lot, but I like to avoid answering. I guess the reason is that it doesn’t matter what I think. I write to take you on a journey into your own imagination – that’s the wonderful thing about the written word rather than watching a movie, it’s what you want to see hear, taste, feel, and smell…for that brief period of time, it’s an escape from reality into your own little world. There’s nothing else like it!

We really feel that way too! So, we often think that environment impacts an author’s story and is usually some how a part of their writing. Is this the case for you and can you tell us a little bit about it?

My stories are always going to be reflections of me and where I’ve been. I spent a lot of my life in Boston, and that is where The Suicide Princess takes place. But I’ve moved around a bit, and you can expect other places I’ve lived to show up in stories… Florida and London, UK are definite stages for future books.

This is one we like to ask new authors: What advice would you give to an author who is in the process of writing his/her first novel?

Like I said before, innovate don’t imitate. Don’t take what someone has already done and try to make it by copying their style. Do your own thing and follow your own heart. I honestly believe that if you bring something fun, new, fresh, and exciting to the world, readers will embrace you and love you for it. Screw what other people are doing, just be you!

And last question for you…What’s the last book that kept you up all night reading?

I have a seven month old son, a new book out, and one in the works….I haven’t had time to read anything in almost a year. But my next book has been keeping me up at night, and I promise that it’s going to make “Anthony Bryan” a household name in 2014… So get used to having me around, I’m not going anywhere!

Stephanie Bradford has it all, right down to the perfect job and amazing husband. While her job as District Attorney fulfills her life professionally, her married life leaves something to be desired. Flat out, she is bored with her husband and the rut they seem to have found themselves in. Enter Derrick Hanson. With his striking good looks, clean cut appearance and tatted arms, Derrick is the prime example of the bad boy in a custom suit type. Stephanie is immediately attracted to him, though she knows that this kind of attraction can get a girl into trouble. What happens next is an emotional roller coaster that will have you loathing Stephanie, frustrated with her husband, disgusted with Derrick and completely turned on. And just when you think, you have it all figured out, you don’t…not even close. I can’t say much more about this book because there is the potential for spoilers. Let me just say this, “Holy wow! What a story!”

Wow! What a ride and what a mind trip this one was! Stephanie, the female lead, starts out as an attorney on her way to the top and planning to do whatever it takes to get there. She’s married to Jacob, an airline pilot, who is steady and seemingly happy with where they are. BAM! Enter Derrick.

Derrick is this naughty, sexy, tatted-up motorcycle-riding guy who is intrigued with Stephanie and is willing to help her push her limits sexually. Think, hot guys out of videos on sites like www.xxxtube1.com and you will know what I mean by pushing her limits sexually. It’s absolutely crazy how quickly Stephanie took the leap down the rabbit hole into what Derrick is offering! But it’s almost easy to believe why she would do it based upon her relationship with her husband.

Born and raised in London, UK, Anthony’s hope, more than anything, is that his words can provide an escape for you, and he hopes they take you on a journey you won’t soon forget. His goal is to give you something different, refreshing and unlike anything you’ve ever read. In a sea of authors pumping out the same cookie-cutter stories, Anthony can only try to be the one who stands out and takes you on one hell of a ride. Find your favorite reading spot, pour yourself a drink (or two) and love every second of every page he writes… After all, he writes them for you!

Throughout his entire life, even as a young child, reading has always been Anthony’s escape from reality. It was a way to temporarily leave the boring monotony of day-to-day life, and it allowed him to visit far off lands, meet unusual characters, take incredible adventures, and even learn about the very edges of our universe. Being able to take his love of reading and transform it to a passion for writing has been the greatest gift he has ever been given. 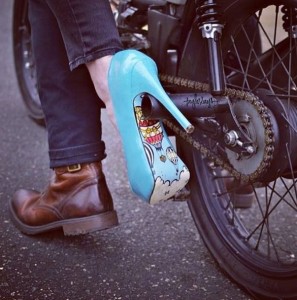 Who’s ready for one of the best giveaways of 2014 with an amazing prize-pack? Anthony Bryan is giving away a pair of custom high heels designed by Taylor Reeve herself, a bundle of signed paperback copies from your favorite authors, a Kindle e-reader, and possibly best of all, a Skype session with Anthony to video-chat about The Suicide Princess with him after you finish reading… But seriously, he’s giving away one hot pair of heels from Taylor Reeves’ “Legs for Days” collection to the lucky winner, and here’s how to win:

First, get over to Amazon, and if you haven’t already, get a copy of The Suicide Princess for Kindle – it’s only 99 cents all week starting on January 13! Then follow Anthony on Facebook, and watch for him to post the winning comment “Who wants to win a pair of heels?” The first person to reply with the comment, “I do! I do! I do!” will be asked to show him that you grabbed The Suicide Princess on Kindle prior to posting the winning response, and they win – It’s that simple! Anthony will post the winning comment sometime between January 13 and January 18 – but don’t worry, you don’t need to stay glued to Facebook to win. Throughout the week, he’ll be giving status updates narrowing down when the winning comment will be – so just follow his page, check back every day, and follow the clues to win this amazing prize pack. He’ll even be running daily giveaways of a secret prize that you’ll love! So, what are you waiting for? Get over to www.Facebook.com/AnthonyBryanAuthor and get ready to win!!