If we didn’t know darkness, we couldn’t fully appreciate the light.

Garth Black’s more familiar with this concept than most people are. He hadn’t just lived in the dark for the majority of his life—he thrived in it. With a mom who’d bailed on him and a dad whose understanding of coddling started and ended with a bottle of whiskey, Garth had never been expected to rise to any sort of occasion other than following down the same dead-end paths.

That changed when he fell in love with Josie Gibson. After years of pulling each other closer before shoving the other way, they finally stopped shoving. Josie’s love is like nothing Garth’s ever experienced. He holds it close. He holds it sacred. He would do anything to preserve it and keep it from pollution, even if that means removing himself from the picture.

Garth might have been allowed a temporary furlough to bask in the light, but that pass has been revoked, and he’s been swallowed again by the dark. Will he revert to his old ways of hurting those he cares for most? Will he go back to the same destructive patterns . . . or will it be worse this time?

We can’t know light without first knowing dark . . . and Garth Black’s about to get acquainted with the dark in a whole new way. 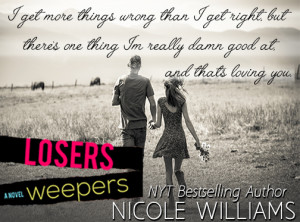 I remember “meeting” Garth in book one of the Lost and Found series and just knew he was a good man, trapped in a sad, broken, hurt man. Oh, don’t get me wrong, I wanted to smack the crap out of him at times! We see a sweet man emerge during Near and Far.  In this book, the relationship between Josie and Garth continues and is put the ultimate test.

I read this book and began to become very frustrated with Garth’s behavior…pushing Josie and all his friends away when he needs them the most.  As I read and became angry, I put myself in Garth’s shoes (well cowboy boots) and thought how he must be feeling.  Relying on others and asking for help wasn’t in Garth’s DNA, he has had to care for himself his whole life and asking for assistance just wasn’t’ going to happen now.

How could one moment, one flash in time, be responsible for changing my whole existence?

He honestly believes he deserves the dark and doesn’t want to pull Josie into the abyss with him.  Josie, however, will not allow him to pull away.  She is a persistent woman in love and will not give up.  Garth will push her to her limits and that is what kept me reading and not putting the book down…for hours!

I’m the New York Times and USA TODAY bestselling author of the CRASH series (HarperTeen, S&S UK), LOST & FOUND series, UP IN FLAMES (S&S UK), The EDEN TRILOGY, and a handful of others. I write stories about everyday kinds of people who find themselves in extraordinary kinds of situations. I tell love stories with happy endings because I believe in making the world a better place, and that’s one tiny way I can make it so. I’m one of those people who still believe in true love and soul mates, and would rather keep my head in the clouds any day over having my feet firmly on the ground.