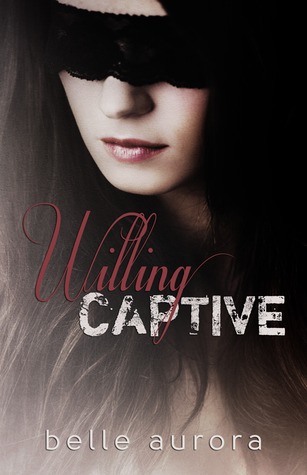 Hosted by: Love Between the Sheets

Delilah “Lily” Flynn is used to her drab existence. Lily’s been living it for twenty two years.  Her boring life is suddenly turned on its head when she’s rudely kidnapped from her bedroom. Or so she thinks.

Nox Taylor is far too high up in his field to be assigned a babysitting job.  There’s nothing more he wants than to complete his mission so he can be rid of the smartass tomboy, Lily.

Day after day, Nox watches Lily and her strange ways. She’s unlike any woman he’s ever met.  Getting close to the girl is purely for her own protection…right?

Lily never imagined she’d make her first real friends in captivity.  What lengths would she go through to keep them?

(Author note: This is NOT a dark romance.)

Belle Aurora drops by Up All Night Book Blog

UAN: Hey Belle! Thanks for joining us at Up All Night Book Blog! We are freaking out excited to have you here so we can get all kinds of good details from you. *wink*

Dawn here – I have to say after reading Friend-Zoned and Love Thy Neighbor, I wanted to pounce on Willing Captive! I almost peed myself I was so excited when I had a chance to read it! I loved it! It was fun and sexy with a nice touch of danger. It is a little different story than the Friend-Zoned series. What inspired you to write W.C.?

UAN: Oh, they definitely are! We loved them!

As much as Lily is an innocent, she’s also very clear on what she wants sexually. Was that a challenge to write a character like Lily?

Belle: Ha! You would think but it was harder to write Nox than it was Lily. As you’re aware, I have a certain style of writing. I inject a lot of humour into my work and Lily is no exception! I found her refreshing and bold, and more often than not, relatable and completely human, flaws and all.

UAN: We love the humor you inject and have loved Friend-Zoned and Love Thy Neighbour! Do you plan to write more about Nox and Lily? Or anyone else from the Willing Captive story?

Belle: Shhhh! But Lily and Nox will be making an appearance in RAW. It will be short. It will be sweet but we’ll see what they’re up to in the future and just how Twitch knows Nox.

Out of all of your characters, do you have one you feel is most like you or that you relate to more than the others and why?

Belle: Oh my Gawd, girl! That’s like asking a person to pick their favourite child! You are out of your damn mind! Hahaha (Insert evil laugh! Bwahahaha!)
If I absolutely HAD to choose one, it would be Natalie. She’s so similar to myself in regards to attitude and sarcasm. She’s been my easiest character to write to date and I love her hidden strength.

UAN: Natalie’s definitely a friend you want to have! (Psst – if you haven’t read Friend-Zoned and Love Thy Neighbor, get to it! They’re fantastic!)

Do you have any that irritate you to the point of wanting to throw your computer?

Belle: Hahaha YES! My bang-your-head-on-the-desk character at the moment is Twitch from RAW. You’ll just have to see why when you read it. He is a complicated man…

UAN: The beauty of the publishing world and all of social media is that you have fans and friends around the world. (Yea, like one from Ohio and one in Oregon! Ha!) You write about stories based in the United States versus South Australia, where you live. What’s it like writing about places so far from home?

Belle: You know I spent a lot of my childhood dreaming about moving to America and being part of the hubbub that goes on there… Now, speaking to you all, I realise there’s not much that goes on there that doesn’t go on at home!

Writing stories set in the US, I hear, isn’t the easiest thing to pull off and it definitely helps to have an editor help you when you accidentally drop in local words. There would be some real confusion there. Like, for example, in Australia we call flip flops Thongs… And a thong in the US is a G-String! So its not very hard to catch myself now but when I wrote friend-zoned, I re-read it about ten times trying to catch all my slipups!

UAN: Oh, yes, the thong versus the flip flop! *laughs* What is something about being a published author that has been a pleasant surprise?

Belle: The open love provided by the followers.

I love chatting to my followers. I’m a very open person. If you show me love, it’s likely I’ll show you love right back!

UAN: And we love you for that!

Okay, last one before we move into the fast & furious questions…Hmmm, can we ask about Twitch? Because dammit if that man doesn’t sound so sexy, dangerous, and certain to make a girl’s parts happy! Grrr….want his bad self right now! *cough* Sorry, got sidetracked…Anything you can share about your upcoming book, Raw and our man Twitch? (Don’t make me beg!!)

Belle: Twitch is not who he seems to be. He is complicated. He is gruff. He has anger issues. And he is a criminal.

Thank you, Belle Aurora!! We loved having you here today! And to wrap things up, we have a few fast & furious questions for you…

Whiskey or vodka: Vodka
Music or no music during writing: Silence!
Boxers or briefs: Boxers. Silk. Black.
Against the wall or on the kitchen counter: Wallbanger!
Suit & tie or well-worn jeans and a T: Suit and Tie!

Right back at you!!!

As always, Belle Aurora does not disappoint! This was story with internal dialogues and interactions that had me laughing out loud, so much so, I swear I snorted out load a few times! *looks around to see who’s listening*

I was first introduced to Belle Aurora’s work in Friend-Zoned and I just knew at that point, she would be a go-to author for me and one that I’d be waiting impatiently for her next book to hit my e-reader and Willing Captive jus reconfirmed that for me!

Lily is the willing captive…well, not at first. I really appreciated her character. She was an innocent, living her life through books. She was 22 and on the surface, innocent. But she was also very ready to take on the world when given the opportunity. Sometimes the innocent virgin role can be overdone, but I found the balance of Lily’s sassy attitude with her growing sensual feelings that peeked through to not make me roll my eyes.

Nox – hot d&@#! He’s sexy, strong, fascinating and has a heart of gold buried under a tough guy exterior. I also really loved his sense of humor and commitment to his job: Lily. I really didn’t know if I was going to like him at first but by getting into his head through the alternating POVs, I fell for him, hard!

Willing Captive has it all – love, friendship, family, sexy time, hilarity, danger (I actually would have loved a little more!), and heartbreak. Seriously, about 3/4 of the way through I thought my heart was going to freaking break in two. The writing was spot on to make me feel a full range of emotions! All of those aspects blended together to make Willing Captive a book I loved and kept me up reading late into the night.

When I was an impressionable teen, I used to sneak read my grandmother’s Zebra Romance novels. By sneak read, I mean hiding in the basement to read what she called historical smut and “completely unsuitable” for a young lady like me. Anyway, one of my favorite things about these books was the titles. Savage Temptress, Catalina’s Caress… I always wondered what a Savage Temptress was and how was Catalina’s Caress? When I saw the title to Belle Aurora’s Willing Captive, I got a little giddy. A willing captive? Does a tall dark stranger sweep her off her feet and make her his? Will the tables be turned on him and she captivates him? I was pleased as punch when the answer to my questions was “yes!” Yes. Willing Captive does involve a tall, dark stranger who sweeps a girl off her feet. She does captivate him. BUT THIS BOOK AIN’T NOTHING LIKE MY GRANDMOTHER’S! Holy cow! What a hot story!

Lily, a sheltered 22 year old woman, would rather read a book than participate in reality. (I get that! ;)) Despite her age, she has never had the chance to really get into the world and live. She works at the family business; she spends most of her time reading and her father likes to keep her close in proximity. That all changes pretty quickly when Lily is kidnapped from her home, thrown into a van and hauled off to places unknown for who knows why! She gets a mega dose of reality and we get to see that, in spite of her sheltered life, Lily is one spunky, independent woman! She knows that her world is small and that there are things out in there that she want from life. Good thing she knows what she wants ‘cuz when she meets Nox, her super-hot kidnapper, Lily knows exactly what she wants from him!! Poor Nox just wants this “babysitting job” to be over quickly, so he can get on to the next assignment. He doesn’t have time for this and isn’t at all pleased with having to stay with Lily…at first. His attraction to Lily is undeniable, and she is a hot, turned on mess when he is around. I would be too, quite frankly. Good looking, rockin’ hot bod and that whole protective alpha male thing. Yeah. I could hit that!

Belle Aurora spins a wonderful story of romance, lust and intrigue! You will laugh, gasp and fan yourself more than once! I really enjoyed the many layers that this story offered. It wasn’t just a romance. There was more to it and I really enjoyed that. This was my first Belle Aurora novel and I am giving it 4 stars!

Belle Aurora is twenty six years old and was born in the land down under.  At an early age she fell in love with reading. Boredom one summer had her scouring the bookshelves at home. She stumbled across Sandra Brown’s Breath of Scandal and fell in love with romance. Having been brought up in a loud and boisterous family of Croatian descent, she developed a natural love for dramatics and humor. Only some years ago had she discovered a new love.

Kristen Ashley and R.L. Mathewson had opened a brand new world where she could lose herself yet feel safe and at home in their stories.

Belle has been known to become a screeching banshee while anxiously awaiting their newest titles. Belle never thought she would write. It had never interested her until recently. Friend-Zoned began to form and in February this year Belle typed the words Chapter One.

And she fell in love.

With a creative imagination she never knew she harbored.