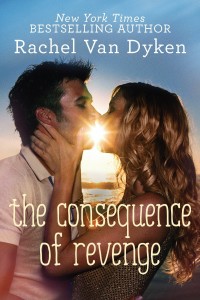 After losing his best friend to another guy, the notoriously too-confident Max Emory suddenly feels lost. He may have devastatingly good looks, an abundance of charm, and a claim to one of the biggest hotel empires around, but he has no ambition anymore. So when his fed-up friends decide they’ve had enough of his moping, they sign him up to be the next bachelor on the reality series Love Island. And between his pride and his forged signature on an ironclad contract, Max just can’t say no.

Now he’s stranded in paradise with twenty-four women, one terrifying goat, and Becca, the breathtaking barista who already turned him down back home. The closer Max gets to Becca, the more determined he becomes to win her over. As she gets to know him better, things start heating up. But is Becca really after Max’s heart—or is she after the cash prize she could claim once the cameras stop rolling?

I hadn’t read The Consequence of Loving Colton, but had heard everyone raving about it.  So I went in blind.  Read it and literally LOL’d.  It’s been a while since I have read a book that made me laugh, multiple times.  Rachel VanDyken had me from just about page one on these books.

I have to say at times, it was almost over the top in book one. How could so much craziness happen to one person, so often? However, the over the top laughs were scaled back a bit in this book.  The Consequences of Revenge was sweet and funny!  I LOVE Max, but OMG, Reid has my heart too.  From his encounters with Grandma to his time on the island, and all his “advice” he shared with Becca, just cracked me up. (Maybe we will see a “Reid Book” in the future??

This book was funny, but was also a coming of age book.  Becca and Max both learned quite a bit about themselves while on the “island”.  What they signed up for (well, what Max’s friends signed him up for) wasn’t what they got from the experience. It was so nice to watch them grow and see that it’s not all fun a games but life can be serious and you can have fun at the same time!

Congrats Rachel for writing a book that will forever be on my list of best romantic comedies! We all need a great book that makes up swoon and laugh and they are few and far between, so this book is a gem in my opinion! 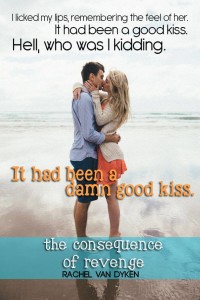 “Have you been sexually active in the past six months?” The doctor sniffed and started pulling out supplies, laying them across the table. I watched in horror as visions of getting abducted by aliens danced like sugarplums in my head.

I read stories where people would just spontaneously combust.

And it was about to happen if the heat in my body and all-around shaking were any indicator.

“I have to—” Jason ran toward the door and slammed it behind him.

“He’s afraid of my nakedness—makes him feel like less of a man.”

“O-okay.” The doctor laughed again and motioned for me to turn around. “Now, drop your pants to your knees.”

Let it be known that no man. NO MAN should ever hear those words from someone who could pass as his great-grandfather.

The cold air bit my ass as I turned and waited.

I did as he said, cursing Jason and all his future children.

Just let it be small.

“And a bit painful, it’s totally normal to experience some discomfort.”

“Ha-ha.” I laughed dryly. “Guess we know what it means if it’s comfortable, am I right, Doc?”

Worst thing to say when you have your pants at your ankles and the doctor’s about two seconds away from making you see stars. Where were the drugs?

Oh. God. Did he need to count down?

“Mother of God!” I shouted, hitting my hands against the metal table as the doctor made his intentions perfectly clear.

“Stop yelling at me!”

I choked when he removed his digits from my special place. I had one of those moments, the kind where you feel so used you’re not sure whether you should cry or laugh.

“All right! You can put your pants back on.”

I felt ashamed. Like I’d just been screwed and not even offered dinner for my gallant efforts in the bedroom. Holy shit, was this that girls felt like after one-night stands?

Where the hell were my flowers?

At least give me a sucker or something . . . maybe a sticker? Saying I got . . . never mind. Those types of stickers were probably illegal.

“Now.” The doc took off his gloves and washed his hands.

He put on a new pair.

“I’ll just need to draw some blood.” He pulled out a giant-ass needle and I had one of those moments that I’m sure every five-year-old experiences right before his mom holds him down while he gets a needle in the ass.

“This won’t hurt a bit.” He laughed nervously.

I winced as he pricked my arm and started drawing blood. His lips were moving but I wasn’t really catching anything.

“All donnne.” His voice was low. Why was he talking so slow?

I shook my head and tried to go to the door but was met with total blackness before I took two steps.

The last thought in my head?

I was trapped in a room with a man who’d just seen my Mighty Max. I hoped to God he hadn’t liked it.

The Consequence of Loving Colton (Book One in this series)

It’s all fun and games…until someone’s heart is broken.

They’re not kids anymore, but Milo Caro is certain that Colton Mathews will only see her as his best friend’s little sister for the rest of their lives. After all, he made that clear the night before she left for college. But four years later, her brother is getting married and Colt’s the best man—and guess who is the best man’s last-minute date?

Milo vows to use the wedding to either claim the smoldering firefighter’s heart or douse this torch for good. When Max—her best friend from college, who may be carrying a torch of his own—crashes the party, they devise a plan to make Colt see what he’s missing. But after Colt catches on, he decides to cook up his own revenge.

Now it’s personal. Colt and Milo are at war, and between Max’s questionable acting methods, an unfortunate trip to jail, and a maniacal fiancée, what could possibly go right? 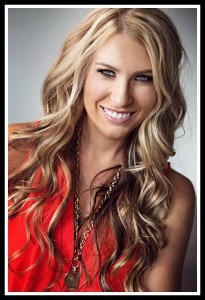 Rachel Van Dyken is the New York Times, Wall Street Journal, and USA Today Bestselling author of regency and contemporary romances. When she’s not writing you can find her drinking coffee at Starbucks and plotting her next book while watching The Bachelor.
She keeps her home in Idaho with her Husband and their snoring Boxer, Sir Winston Churchill. She loves to hear from readers! You can follow her writing journey at www.rachelvandykenauthor.com