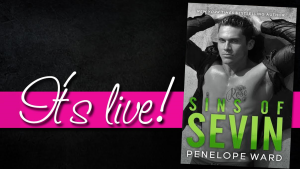 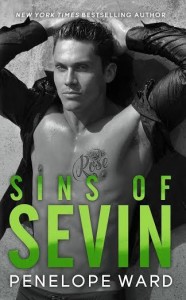 What happens when the one you want is the only one you can’t have?

My name is Sevin.

Homeschooled and sheltered by my ultra-religious family, I was always taught that lust was a sin.

Elle was the girl who’d been carefully chosen for me.

After a long-distance courtship, I’d be moving into her family’s guesthouse so that we could get to know each other in the months before the wedding.

Boundaries were set: no inappropriate touching, no kissing, no sex before marriage.

I’d accepted those rules and my fate.

Until I met the one I wanted to sin with.

That was when restraint became a problem…especially since THE ONE wasn’t Elle.

It was her sister, Evangeline.

You know what they say about best laid plans.

My name is Sevin, and I have sinned.

Told in alternating points of view, Sins of Sevin is a full-length standalone novel.

Only appropriate for adult readers 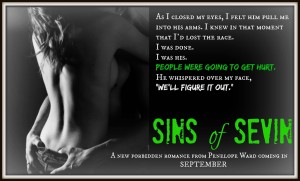 He quietly followed me into the dining room, carrying the flatware. The tension in the air was thick as he walked behind me around the oval table, setting down silverware after each plate I’d put down. It was like some weird game of musical chairs where awkward silence replaced the music. The hairs on my back stiffened. We weren’t saying anything, but it was as if I could feel the weight of a thousand words along with the heat of his body so close behind me.

When I noticed he’d just put a fork where the spoon was supposed to go, I switched it. “The forks go on this side, actually.” My hand was shaking. I couldn’t believe how little control I had over myself.

Noticing my nerves, he suddenly placed his hand over mine and whispered, “Stop.”

Chills ran through me. My heart started to beat faster. My nipples hardened. I hated my body for responding to him with equal amounts of fear and lust.

I turned to him, his hand still over my knuckles. It felt like I couldn’t breathe as he just looked at me.

My mother’s footsteps caused Sevin to move his hand off mine with lightning speed.

Mama entered, and we continued setting the table as if our stolen moment hadn’t happened.

This book has tortured my heart.Over and over again, my heart broke. The forbidden romance that just couldn’t be…it was never the right time and my heart broke for all of them…Elle, Sevin and Evangeline.

The connection between Sevin and Evangeline were not just physical.  From their first meeting to every other time they were in each other’s presence they were connected.  There was an undeniable pull between these two. Just heartbreaking to witness at times.

“You’re my truth.  The only thing that has ever felt natural to me is loving you. No one is going to tell me I can’t love you.”

I am worried so many will see the religious tone to this book an possibly be turned off, but believe me when I say, this book will give you hope and faith in love as it’s never been done before.  The twists in this story were unrelenting.  They kept coming and coming.

“I wish I could rid you from my heart, but you are my fucking heart.”

Penelope Ward is a New York Times, USA Today and Wall Street Journal Bestselling author. She grew up in Boston with five older brothers and spent most of her twenties as a television news anchor, before switching to a more family-friendly career. She is the proud mother of a beautiful 10-year-old girl with autism and a 9-year-old boy. Penelope and her family reside in Rhode Island.

Other books from Penelope Ward