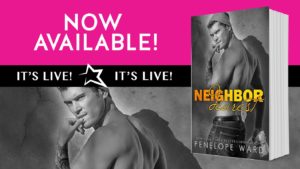 Neighbor Dearest is LIVE and on limited-time release sale for $3.99 (Changing to $4.99 after release. This will be the ONLY sale.) A sexy STANDALONE friends-to-lovers story that does NOT have to be read in conjunction with any other book. 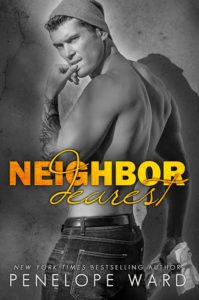 AVAILABLE ON ALL RETAILERS: 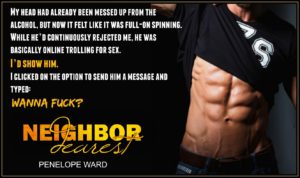 A STANDALONE NOVEL that does NOT need to be read in conjunction with any other book.

After getting dumped, the last thing I needed was to move next door to someone who reminded me of my ex-boyfriend, Elec.

Damien was a hotter version of my ex.

The neighbor I’d dubbed “Angry Artist” also had two massive dogs that kept me up with their barking.

He wanted nothing to do with me. Or so I thought until one night I heard laughter coming through an apparent hole in my bedroom wall.

Damien had been listening to all of my phone sessions with my therapist.

The sexy artist next door now knew all of my deepest secrets and insecurities.

We got to talking.

He set me straight with tips to get over my breakup.

He became a good friend, but Damien made it clear that he couldn’t be anything more.

Problem was, I was falling hard for him anyway. And as much as he pushed me away, I knew he felt the same…because his heartbeat didn’t lie.

I thought my heart had been broken by Elec, but it was alive and beating harder than ever for Damien.

I just hoped he wouldn’t shatter it for good.

Author’s note – Neighbor Dearest is a full-length standalone novel. Due to strong language and sexual content, this book is not intended for readers under the age of 18.

I had no idea that Chelsea was a character in Stepbrother Dearest since I hadn’t read it yet. Now that I know this and have read her story I TOTALLY need more. This was a emotional read of love and life.  It’s filled with anguish, Penelope really knows how to rip the band-aid right off.

Chelsea is sweet and loving but she’s alone and heartbroken. She moves into an apartment that’s closer to the youth center  where she works. She is really struggling with learning to live with the loss of her boyfriend, she’s is questioning herself as to why it failed and blaming herself.  She finds herself talking with a therapist most nights but she isn’t making progress.
Damien is her landlord and an artist –he’s a bit of a mystery. He’s so much more than what meets the eye. Damien tries to keep his distance from Chelsea but he’s so drawn to her,  he’s never felt that before. Chelsea is mesmerized by Damien. The barking double D’s is what breaks the ice for these two to become fast friends.  There friendship grows but they both keep their distance. They are both hurting and can’t move forward. As their journey begins it will give you chills and thrills, lots of emotions and you will be on high alert. It’s passionate, romantic and fun loving look at life and friendship. I devoured this book! 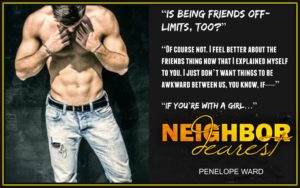 Looking tense, he placed his hands slowly into his pockets as he looked at me. “What exactly happened last night?”

“What are you talking about?”

He moved in closer to me. “What am I talking about? You leaving me with a giant fucking basket of muffins and running off before I could even say anything? Ring a bell?”

“I thought you’d be alone. It caught me off guard.”

His eyes softened. “You were upset…”

“You’re a terrible liar, Chelsea. Fucking horrible at it. You don’t hide your feelings very well.”

“You think you know just about everything there is to know about me, don’t you?”

“Not everything. But it doesn’t take a rocket scientist to read you. It’s one of the things I like about you, though. You’re one of the least fake people I’ve ever met.”

“Honestly? I think you’re confused about me.”

“Yes. I think you’re wondering why I opted not to have dinner with you and instead ended up with a woman I’d literally just met, someone who isn’t as sweet as you and sure as fuck isn’t as pretty as you. So, you’re wondering what the hell I was thinking. Am I right?”

That’s exactly what I was thinking.

He continued, “I know we haven’t known each other for very long, but I do feel a connection with you, okay? If you’ve sensed something, you’re not imagining it.”

“Well, if I wasn’t confused before…now I definitely am.”

“I feel like I need to say this now, because I can’t stand the thought of you thinking that I somehow find you undesirable when it’s exactly the opposite.”

I crossed my arms. “Again. Not following you.”

He closed his eyes as if to try to find the right words. “It’s just that I know for sure that I can’t ever be what someone like you needs in a boyfriend, in a partner. It’s not that we wouldn’t have fun or be great together at first. I’m just not good for you in the long-term—not marriage material. And the reasons are too complex to get into, except to say that it has nothing to do with you and everything to do with me. I can’t, in good conscience, start something with a girl like you.”

“Yes. You’re not the kind of girl a guy takes home for a quick fuck. You’re the girl he keeps.” 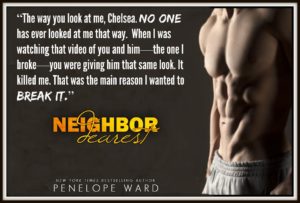 Penelope Ward is a New York Times, USA Today and #1 Wall Street Journal Bestselling author. She grew up in Boston with five older brothers and spent most of her twenties as a television news anchor, before switching to a more family-friendly career. She is the proud mother of a beautiful 11-year-old girl with autism and a 9-year-old boy. Penelope and her family reside in Rhode Island.

OUR REVIEW OF ROOMMATE

OUR REVIEW OF STUCK-UP SUIT

OUR REVIEW OF COCKY BASTARD

OUR REVIEW OF SINS OF SEVIN