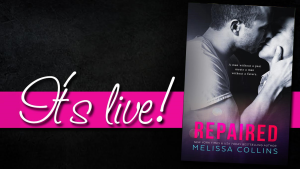 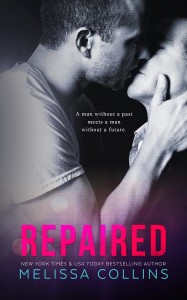 Liam Davis is a man without a past. That’s what he wants everyone to believe, anyway. Hell-bent on erasing any memories of his previous life, he knows that starting over is all he can do. Hiding who he is, where he’s from, why he’s running, and especially who he’s left behind, Liam has run away from everything he’s ever known. His plan works perfectly until one day when Parker Ryan threatens to expose his carefully concealed world.

Parker Ryan is a man without a future. Sure, he’s a partner in one of New York’s most prestigious law firms, but he’ll never be more than a failure in the eyes of his boss, his father. Rather than break away from his father’s standards, he finds himself mindlessly pursuing them, in turn sacrificing anything that would actually make him happy.

When Liam’s and Parker’s lives collide, the ugly truth about who they really are, and who they hope to become reveals itself when they least expect it. As both of their lives become wrecked beyond all belief, they’ll learn how to rely on each other in their journey to become Repaired. 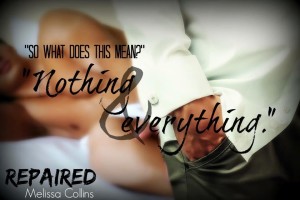 What do you get when you have one seriously hot and frustrated alpha male lawyer and one devastatingly broken and beautiful mechanic?? One hell of a story….

Repaired by Melissa Collins is the third book, I have read from her. All have which been M/M. I am enamored by her free flowing and effortless writing style. Her stories are always emotional, witty and seductive. I love that she writes about the lost and defeated people. She creates unique characters the you can’t help but fall for. The boys in Repaired, Parker and Liam are the epitome of opposite, but yet they compliment each other so well. Both providing exactly what the other needs. Two people who are so broken for very different reasons. Even with all their cracks, they are perfect for each other. Theirs is a love story based on trust and devotion.

Liam is sweet, oppressed and in desperate need of love and acceptance. He’s honest and real. He comes from nothing. He’s running from his past….

Parker exudes confidence but always seeks approval. He’s a take charge alpha male, who is also a care giver with an abundance of compassion. He comes from money and greed. He can’t see his future…

Put these two together sparks fly, friendship blooms and love soars, but can they get the life they deserve? Or will they allow their demons to rule them? Both have had it hard but their hearts and souls remained true and sincere. Not letting there situations define them. It’s another inspirational story of hope, love and salvation. There are a few twists and turns, I did not see coming. As well as, some very interesting and charming characters, that I would love to know more about…. hint hint 🙂 Once again, I have fallen madly in love with Melissa’s boys!! I must thank her for giving them to me. My only wish is for everyone to take a chance on Melissa’s M/M books. She shows us, love is love. Her books have the ability to change people’s perspectives on gay romance. So many people I have talked to have a misconception about the M/M genre. I have been lucky enough to only read amazingly beautiful and inspiring love stories, that have touched my heart and soul….. I know I am a better person for opening my heart to them. Trust me. Read Melissa’s books!! She has become one of of my go authors…

Walking over to us with a full tray of shots, she winked at Annie. “To the birthday girl.”

We each took a glass, clinking them together before downing the clear liquid. “Shit, that reminds me of college.” Coughing, I dropped the glass back onto the tray as the 151 burned a path down my throat.

Liam had no such issues, easily swallowing his shot and the spare one that Annie hadn’t taken. Assuming the reason for her refusal was also the reason for the shocked look on Drea’s face, Annie quickly excused Paulie and herself to go and greet other guests. Drea trailed behind them like a lost puppy.

When I turned to look at Liam, a similar look of shock was on his face. His jaw was locked tight, so tight it looked like he might crack a tooth. “So,” I dragged out the word, wondering why the hell Liam was so pissed off.

Liam gave me no response, walking away from me and toward the bar. By the time I caught up to him, he’d already ordered another round of shots. Figuring the night was only getting started, I joined him in one more shot. I declined the next round, but watched on in amazement as he downed his fifth shot within a matter of ten minutes.

“You better slow down.” Liam was a grown man and could make his own decisions and maybe he had a high tolerance, but, in my experience, being as angry as he seemed to be and drinking was never a good combination.

Without moving his body an inch, he graced me with a rather seething look. “What the hell is your problem?” I snapped.

“Nothing,” he grumbled. Shifting his position, he rested his elbows on the bar top and cradled his head in his hands. “Look, it’s nothing, okay.” Finally turning his head to me, his tone softened. There was so much pain in his eyes it bordered on anguish. My gut told me a man like Liam wouldn’t deal well with pity, so instead of pushing the issue, I tipped my chin to the bartender, who was starting to become overwhelmed with the growing crowd.

After she handed me the round I’d ordered, Liam’s eyes widened in shock. “Calm down. I didn’t get these for you.” In quick succession, I downed the two shots. Slowly, and with determined purpose, I dragged the back of my hand across my lips. Liam’s tongue darted out of his mouth, licking his own lips, almost as if he was subconsciously reacting to my own movements. Angling my head out to the dance floor, I reached down for his hand. “Let’s go.” Even if he’d thought I was asking—which I wasn’t—he didn’t answer.

With his feet glued firmly to the spot, he closed his eyes and pinched the bridge of his nose with his free hand. “Look, you don’t have–”

Stroking my thumb over the soft skin of his wrist, I interrupted him. “I know I don’t have to do anything, but right now, I want to dance. So unless you have some kind of objection to my body moving up against yours, or to other people seeing us out there, then you have no choice.”

Liam’s full lips quirked into a lazy grin, perhaps as a result of the alcohol, but I’d like to think it had more to do with me. “I don’t care who sees us,” he said with a carefree honesty.

For the briefest of seconds, I worried that maybe Liam didn’t dance, and that we were about to make terrible, drunken fools of ourselves, but that concern was all resolved when he started swaying his hips to the music. Shocked into staying still, I watched from his side, more than admiring the way his body swayed and popped. “Those are some mighty fine moves you’ve got there.” His joke was barely audible over the loud bass of the band, playing a cover of a rock song I’d heard once or twice. But his smile. Fuck, even in the dim, near-black nothingness of the bar, his smile lit up the room and it made it impossible not to fall in line behind him.

My hands fell to his hips, pulling his back right up against my front. With his ear right next to my mouth, I said, “I couldn’t get my brain, my feet, and my dick”—I pressed up against him as I pulled him back toward me to let him feel exactly what I’d meant—“to work all at the same time. Clearly, my body can only control two at a time.” Liam’s hands covered mine on his hips, his body gracefully undulating to the pulsing beat of the next, much slower, song.

Spinning to face me, he dropped his arms around my neck. Speaking just loud enough to be heard, he pressed his lips against my ear, sending an endless river of excitement coursing against my skin. “I like the way your body works.”

My hands found their way into his back pockets, squeezing the hard muscle of his ass. “Your body works pretty well, too.” Pressing my thigh in between his, I felt the hard heat of his erection. Almost as if there was nothing between us, I could feel his pulse beating along what I imagined was a thick vein running from his sac to his tip. My mouth watered at the thought of feeling it beat against my tongue. He adjusted his stance, allowing his dick to press up against mine and I barely concealed my pleasure, groaning into his ear. If the song had lasted a minute longer than it did, I would have come in my pants like some lust-ridden teenager jerking off for the first time.

Liam pulled back from me, angling his face in a way that caught the yellow-white glow of the lights he’d strung up earlier. Not for the first time, I was struck by how attractive he was. Everything about him was the definition of male beauty. From the naturally tanned skin and amber-brown eyes, to the day-old scruff dusting his jawline, to the rock hard muscles moving against mine; Liam was everything I wanted in a man.

And just as that thought barreled through my brain like a train inches away from derailing, he smiled at me—a gorgeously lopsided grin that somehow settled something in my brain and my body.

When I tried to make sense of it all, the band shifted gears once again, belting out the words to what was apparently Annie’s favorite song. The crowd quite literally went wild, filling what little space was left on the dance floor. We all moved together, laughing and having a genuinely good time. 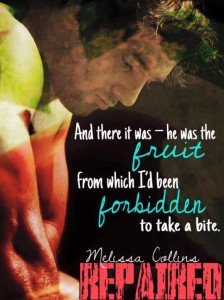 Melissa Collins has always been a book worm. Studying Literature in college ensured that her nose was always stuck in a book. She followed her passion for reading to the most logical career choice: English teacher. Her hope was to share her passion for reading and the escapism of books to her students. Having spent more than a decade in front of a classroom, she can easily say that it’s been a dream.

Her passion for writing didn’t start until more recently. When she was home on maternity leave in early 2012, she read her first romance novel and her head filled with the passion, angst and laughter of the characters who she read about it. It wasn’t long before characters of her own took shape in her mind. Their lives took over Melissa’s brain and The Love Series was born.