Sometimes the things we shouldn’t want become exactly what we need . . .

Waitressing at a seedy strip club isn’t ideal, but it pays Sarah Adamson’s tuition. Her goal is to finish her master’s program and get a job that doesn’t involve tight skirts and groping hands. She doesn’t need distractions. Especially not the one that comes in the form of a hot-as-sin tattoo artist who works across the street from her apartment.

Kicked out at sixteen, and a high school dropout, Chris Zelter is familiar with wanting things he can’t have. His fractured life has never been easy. As the product of someone else’s bad decisions, he knows exactly what happens when the wrong person controls your marionette strings. Now an accomplished tattoo artist in a renowned studio in Chicago, Chris has it together.

Apart from his infatuation with Sarah. She’s way out of his league, and Chris knows it.

But he’s willing to be her bad decision. At least for now.

I’d been seeking out Chris as much as I could lately, even though he was worried about my lack of sleep. My feelings for him had become like weeds, growing faster than I could contain them. I should’ve been protecting my heart instead of trying to hand it over so it could be crushed later.

So tonight, instead of pushing him to talk about whatever was making him hurt, I let him have what he wanted: an escape. I could be that.

I was exactly that every night I worked in the club. I was my customers’ escape from life, from the wives who ignored them, or from the girlfriends who didn’t exist. I smiled and batted my eyelashes and pretended their lewd comments were funny.

Tonight I could easily be whatever Chris needed, and if that was naked and a distraction from the things outside of his control, so be it. Or that’s what I told myself as I pushed his boxers over his hips.

My clothing took a little longer to remove since I was fully dressed. Chris wasn’t as slow as usual, or gentle. There was an urgency in him I’d never experienced before. What he wouldn’t give me in words, he gave me in actions. Desperation leaked through, making him frantic as he pulled my shirt over my head and fought with the clasp on my bra.

I brushed him away, taking care of the bra for him. Sitting on the edge of the bed, I opened my legs and welcomed him between them. He locked shaking fingers around the waistband of my jeans and paused, his expression clouding.

“You sure you’re okay with this?”

“With you wanting me?” I popped the button.

He lifted his gaze. “I fucking need you.”

I shivered at his tone, wishing it indicated a different kind of need—a sustained one that was more than physical. But I pushed the feelings down, locked them inside my aching heart, and released my zipper. “Then you should have me.”

Helena has proven that she can write a different genre with the Pucked series being rom-com. Then, with this series, it’s filled with emotions and angst. I really enjoyed reading and Chris and Sarah story. It’s fast paced; I read it in one sitting. When you read about two broken souls who are trying to escape from their way of life, the book just sucks you into all the possibilities.
Sarah Adamson is a waitress at a seedy strip club. Not her ideal job, but she needs to pay for her college tuition. Her goal is to get her master’s degree and say goodbye to her job. She sick of wearing the skimpy outfits and groping hands. Sarah needs no distractions, just her will to survive.
Chris Zelter hasn’t had an easy life. Kicked out at sixteen, the high school dropout has made some really bad decisions. He catches a break and becomes a well-known tattoo artist in Chicago. With his past family life always there, he doesn’t know how he’s going to move on.
These two characters both have fractures in their lives. Will these two tortured souls be able to let the past go? Will they be able to live a life together? There’s only one way to find out. Read Fractures in Ink. 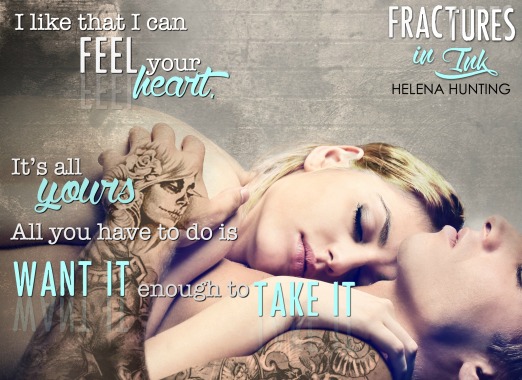