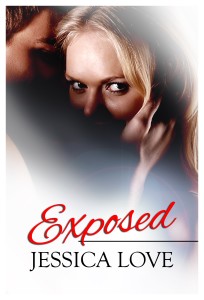 Exposed by Jessica Love features a main character who has the same name as the author.  Is it an autobiography, or not? Attempts to locate Ms. Love directly have been unsuccessful, even though the book indicates she should be listed in a Seattle business directory and, as a lawyer, with the Washington State Bar Association. No luck.

She also may have spent some time in some of Seattle’s “more adventurous” clubs, where some of the “pivotal” action takes place.

Exposed (Exposed Series, #1), ISBN 098847848X, is currently available as an e-book on Kindle for $3.99. The list price for the paperback is $15.95 and available online through Amazon, Barnes and Noble or through your local Independent bookstore.

An easy read for a book nearly impossible to classify, according to some of the very positive reviews. Is Jessica Love for real?

But there is more to Jessica than just sex. After she defends in court a girl accused of importing drugs, Jessica becomes the target of someone who wants her dead.

Eventually, the themes of this contemporary suspense, romance and sex novel come together when Jessica learns who she really is, finds her attackers and gets her revenge. “Exposed” describes how Jessica became the directing force of her own life, how she leaves condemnation behind, and separates sex and romance.

You don’t think we’ve met? We have, more than once. I sat next to you once at the airport, and you asked me what time it was. I hoped you wanted to strike up a conversation. We sat at tables next to each other at that coffee shop on the corner, where the atmosphere and coffee both have character.

Remember when I caught you staring at me when I came out of the court house? Or was it the exquisite old building where I practice law? You were embarrassed, but I didn’t mind at all. In fact, you made me smile.

Maybe we met at one of the “special clubs” I enjoy in Seattle, or Portland, or Vancouver or San Francisco, Denver or Las Vegas. You know, clubs where clothing is optional and anything goes, with friends or with strangers. I admit I like that, but “no” always means “NO.”

 I’ve been told I am as cold as the antarctic, or as hot as a black sand beach in the Caribbean; it’s said I am either indifferent, or too passionately engaged. These are labels and don’t really matter to me any more. I’ve been called a slut, a force, a lawyer, a nymphomaniac. You decide which one was the insult if you’d like, I don’t really care.

This book is about who I am and why I’m that way. I describe a few events in a story you will think explains everything. It does not, but will give you an idea of how I grew up, how I discovered sex, what I like about men and what I don’t, how close I came to being murdered and how that led to my discovery of who I really am.

Sometimes, when explanations fail, story is all we have. And though my story may be very different from yours, you and I are very much alike in that place where we hide our desire.

Have you ever finished a book, put it down and thought,

“What the hell did I just read?”

It’s rare that I do, but when I finished Jessica Love’s debut novel, Exposed, that is exactly what I thought. Days later, as I write this review, I’m still not sure. Exposed is a story full of intrigue, dark desires and paradoxes. It’s written as an autobiography, yet I’m not sure if it really is. It makes great fiction too…See that! A paradox. Truth or fiction?

Jessica is an incredibly strong, smart, deep character. She is a lawyer and a wife. She has a past that is both sad and somewhat extraordinary. Her French grandmother raised her to be an independent thinker, to not worry about what others think about her or how they see her. She has a sexual appetite that is both disturbing and titillating. She is completely comfortable with it. Jessica is WAY more than meets the eye and you never truly understand all of who she is. We find out all of this and more through the various experiences she has.

All of this is woven in a story that is hot, suspenseful, and a little unbelievable. At the end of the book, you find yourself asking, “Did this all really happen? Are her experiences real? Who the heck is Jessica Love?” While the writing is strong, I had a hard time relating to Jessica. I found that some of the story was predictable, and at the same time I had no idea what was coming next. I’m still not sure if this is truly an autobiography or fiction. Either way, leaving the reader wondering which way is up is pretty brilliant.

My biography is not full of great accomplishments. I could fluff it into something that would make you go, “wow,” close enough to the truth no one could refute it.

But I’m not going to do that. I was born in Washington State, the “wet” side. I was an “A” student in high school and college, did well in law school (not in Washington) and have a good career. There is more detail in the book, “Exposed.” Really, if you want the background, it will cost less than a sandwich to buy it.

I am resilient, and I embrace this life fully, and as honestly as I can.

My life really started when I was kicked out of the house in my early teens by my father (yes, it had to do with sex), to be raised by my French Grandmother. She was very sophisticated, and very connected to her values.

She taught me life skills. Often with backgammon, she taught me that there are sacrifices one has to make and others one should never make. She also taught me about loyalty and love.

She had nothing to do with the creation of or development of my sexual appetites. That’s the result of wonderful biology. What she did give me was shelter from the oppression of other people’s judgment.

A reviewer of Exposed said I was “… more complex than you or I (the reviewer), and although many of us are three dimensional, she is so much more.” That was very sweet. But the fact is, we are all complex.

I was simply given a context to be the woman I want to be.

Media inquiries should be made to: