═ Blurb ═
Dad Bod Contracting—for ALL your domestic contracting needs. Have a leaky faucet or clogged disposal? Need a new patio with intricate brickpaving designs? Want your garage transformed into a yoga studio? Dad Bod Contracting has you COVERED. Our clean, well-mannered, and friendly professionals pride themselves on attention to detail. Every job comes with a 100% customer SATISFACTION  guarantee. No job is too small. Hand us your “honey-do” list and we’ll get it done, and we’ll look good doing it! A good job well done is one phone call away, so call Dad Bod Contracting today!
It started with a window that was jammed shut. Pretty simple, right? All I wanted was to open the windows while I tidied the house. I’d been after my no-good husband to do it for months, but he never did. And then he shacked up with his secretary, leaving me with a pile of bills, husband-free for the first time in ten years, and with a house that was falling apart.
The ad popped up on the side of my social media feed—a local contracting agency willing to do pretty much anything. Since I don’t really know a screwdriver from a ratchet, I gave them a call.
And let me tell you, the ad was NOT lying. Jesse O’Neill can do it ALL…and looks amazing doing it.
He fixed my window, so I called him back to fix the sagging, splintery front steps. Which led to him fixing my kitchen sink. And then he recarpeted my stairs. And then fixed the squeak in my bed.
He was supposed to fix my house, not my rusty, sputtering libido. And certainly not my broken heart.

“What do you want – what do you need?” “Everything”

Hammered is book #1 in the brand new Dad Bod Contracting series. It is hot, fast paced with lots of great funny banter! And…it is down & dirty!

Imogen is newly divorced and in a bit of a rut. Her ex left her with nothing except the “fixer upper” house that they had bought. She breaks a window after trying to open it without success. She comes across an ad for Dad Bod Contracting meeting Jessie who is sent to give her an estimate to fix her window.

“If you take pure, raw, unfiltered, male sexuality and boil it down to essence, and then infuse that with things like smoldering eyes, rugged good looks, and a piercing stare, you’d have a general approximation of the man who stood in my doorway.”

Imogen and Jesse hit it off pretty fast. Their banter is fun! Jesse is hot & sexy but also kind and caring. Just a really great guy! Imogen has had a rough few years. Being in a tough marriage has left her drained financially and emotionally. Although the attraction is there between Jesse and Imogen, they spend a lot of time talking and getting to know one another. They are also a more mature couple. They really burn up the pages!

There is also a bit of drama because they both have baggage to deal with, but nothing too crazy. A great, sexy, summer read providing you with a little get away! You may want to read this by the pool because you’re gonna want to jump in to cool off! We meet Imogen’s best friend Audra and Jesse’s friends Ryder, Franco and James. Looks like we’ll be seeing Audra get “Drilled” by Franco next! 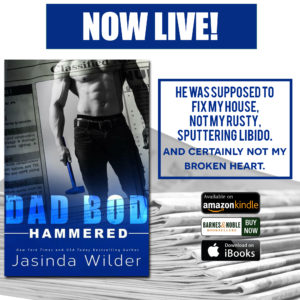