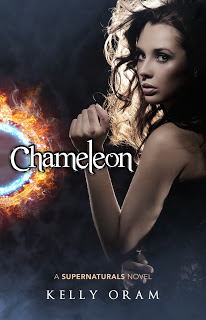 For small-town rebel Dani Webber magic and monsters are no more real than the Easter Bunny… until the day she accidentally stops time. Dani quickly discovers that not only do supernaturals exist, but she herself is one of them. This is great news for her life-long best friend Russ, who can finally come clean about his own supernatural status and his undying love for her. Before the two can start to enjoy the long overdue relationship, Dani is taken by a powerful council of supernaturals who believe she is the Chosen One destined to save them from extinction.

As if being kidnapped and expected to save the world isn’t bad enough, an ancient prophecy warns of the Chosen One’s dark nature: “Only the truest love will keep her an agent for good.” The council believes they know who this “true love” is and, unfortunately, that person isn’t Russ. The mysterious, powerful and devastatingly handsome Seer is the last person Dani wants in her life, but when she starts having visions of a horrific future, she has no one else to turn to for help.

Soon Dani finds herself torn between two very different boys with two very different opinions of whom she can trust. With the visions getting worse and time running out, Dani is forced to put aside her feelings and work with both the Seer and Russ before an ancient evil is unleashed upon the earth.

Gabriel thought for a moment and then said, “Shall I tell you what I saw?”

The question was so unexpected I couldn’t stop myself from asking, “What? You saw something just now too?”

Gabriel shook his head. “I have only ever had one vision concerning you. I was speaking of the vision wherein I recognized you to be the Chosen One.”

“Since my vision has caused you so much suffering, would it comfort you to know what I saw that night? What the council is so determined to protect despite what it cost you? I warn you, it is not all pleasant.”

I had to know. I had to know what made the council think they had the right to claim my life. “Tell me.”

“You were in an abandoned warehouse hanging from a cross. Your wrists were cut and bleeding onto on an altar built at your feet.”

My hand flew to my mouth but Gabriel didn’t seem to be too distressed. He took my hand and I let him squeeze it. “When your blood fell upon the altar, it summoned a demon. Not just any demon—an extremely powerful demon. Addonexus, the Angel of Death.”

Gabriel squeezed my hand again and I watched, incredulous, as a smile broke out on his face. “You were dying, but you were not the least bit afraid. You were angry, and defiant and confident—much like you were when you met the Supreme High Councilor for the first time. Addonexus thanked you for raising him and told you he was now going to use your body as a vessel to bring death and destruction to all the world.”

Gabriel actually laughed then, as if remembering a funny story he’d heard years ago. “You looked the Angel Of Death in the eyes and said, ‘If you enter this body, the only death and destruction it will bring is your own when I send you back to Hell.’”

Gabriel was caught up in the memory of his vision and absently brought my hand to his lips.

I stared wide-eyed at him until he seemed to come back to the present. “And then what happened?” I gasped.

Gabriel frowned. “And then the vision ended.”

“That’s it?” I was horrified by that thought. “You mean you assumed I was the Chosen One just because I mouthed off to some freaky demon? That doesn’t prove anything. I mouth off to everyone! How do you know this demon guy didn’t barbeque me and eat me right after that?”

I was so not kidding, but Gabriel laughed again. “Danielle, you were radiant. I’d never before seen a supernatural of your equal and I just knew. I knew you were the Chosen One like I know the sky is blue.”

“I can’t believe this,” I muttered, shaking my head and holding my hair in my hands. “That’s called having a crush, Gabriel. Just because you were impressed with what you saw doesn’t mean I’m some kind of savior. You can’t be sure I’m the girl you need.”

Gabriel shook his head forcefully. “You do not understand. When I saw you it was somehow more than a vision. It was as if I knew you. I knew your name even though you never said it. I knew where to find you even though you were far from home. Danielle, I recognized your soul.”

Gabriel had become so intense that he scared me. When I shuddered, he took both of my hands. “You are special. The Creator led me to you for a purpose. If you do not do this task, the Angel of Death will be loosed on earth. There is no one that can defeat him but you. Forgive me, I am sorry for your pain, but I believe a task of such importance is worth sacrificing the life you had.”

It was clear that Gabriel had absolutely no doubt I was who he thought I was. I’m not sure if his faith in me was comforting or terrifying. “They still could have asked,” I muttered stubbornly. “Instead of just taking me.”

“I am asking you now, Danielle. Will you be that girl? Forget your disagreement with the Councilor. This is beyond even him. Think of the supernaturals you have met so far that are good, decent people—your friends—Duncan, Gina, Alexander Devereaux, Russ…”

“You.” The word escaped my lips before I could stop it.

Gabriel smiled and put his hand to my blushing cheek. “Think also of the humans you love so much. We will all be lost. I beg you to stop fighting your destiny and live to fulfill the prophecy.”

I drew back from Gabriel’s touch and my voice shook as I said, “But I don’t know how. I don’t know anything about your world.”

“Our world,” Gabriel corrected. “And I will help you.”

Wow what a fun ride this story is.  It captivated me from the start. This is a YA paranormal read.  However, I never felt like I was too old for this.  The pace moved at such a nice flow that it was thrilling.

Dani is a fun girl who has lived in a small town with her best friend Russ.  Their chemistry is at times almost silly.  The pair often gets into trouble.  From the start you really enjoy their dynamic.

The supernatural awesomeness that is Dani is still innocent in so many ways.  You watch her struggles.  You feel for her when she is at her most vulnerable.  The way Kelly wrote Dani has you rooting for Dani all the way through.

Gabriel oh Gabriel, where art thy Gabriel, a boy to whisper Shakespeare  in Dani’s time of need. Gabriel is patient with Dani when he needs to be.  In times you just feel for him because of the heartache he witnesses.

This story has it all, adventure, suspense, mystery, awesomeness and  most importantly love.  Part of the time I was afraid this was going to be a cliffhanger.  Although it is not, you are left in hopes that these characters will be seen again and again.  They are fascinating and invigorating.  By the end of this book I was excited from the thrill of it, and my heart was warmed by the love in it.

Intense, fast-paced, complex read! I truly enjoyed reading Chameleon and although it was a bit longer of a read for me, I was enthralled throughout it all. Twists and turns, good versus evil, true love, supernatural beings…whew!

The story starts out innocently enough with Danielle/Dani’s birthday and a harmless prank pulled off by her and her best friend, Russ. Then all the craziness breaks loose, Russ is not who he seems, Dani is not either, and suddenly life becomes a run-for-your-life thrill ride. I loved how complex this story is yet I never felt lost. I felt like I was on the run with Dani the entire time, trying to figure out how it was all going to end, all while feeling her dilemma between Russ and Gabriel. Oh, did I mention a love triangle? Gah! Kelly Oram had me so caught up in Dani’s story that I was as conflicted as she was regarding those two.

Kelly Oram wrote her first novel at age fifteen–a fan fiction about her favorite music group, The Backstreet Boys, for which family and friends still tease her. She’s obsessed with reading, talks way too much, and loves to eat frosting by the spoonful. She lives outside of Phoenix, Arizona with her husband and four children.