Blog Tour ~~ A Taste Of Summer by Beverly Preston 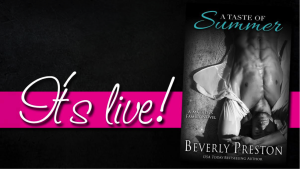 A TASTE OF SUMMER BY BEVERLY PRESTON

Laugh, cry and fall in love in the newest standalone within the

A Taste of Summer. #SummerNeverTastedGood 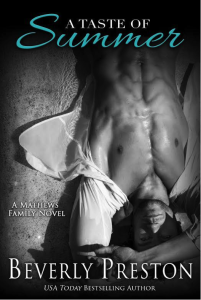 Most people know Hollywood heartthrob, Ryan Summer, as Ryan, no last name required. But once upon a time, he was just Summer to Carrie Ann—before a decade of blockbuster hits skyrocketed his success into superstardom.

Summer was smart, gorgeous, and cocky as hell. Nothing was out of his reach. Not even Carrie Ann Lowell. He was the love of her life—until he shattered her heart. Their breakup left more than a profound rift in her soul. It crushed her.

When Carrie Ann’s college flame forces his way back into her life, his dirty-talking, bold self-assurance re-ignites a passion she thought had long since been extinguished. Carrie Ann didn’t believe in second chances.

Not even for him.

No matter how deliciously tempting.

With sparks flying and hidden truths unraveling, will Carrie Anne be able to deny her desires to save herself from another heart break? 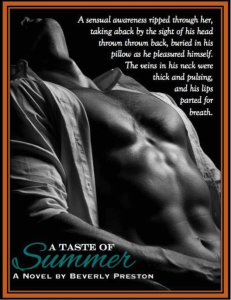 If you haven’t had the chance to meet The Matthew’s Family, you really need to find the time.

This sweet, damaged woman Carrie Ann will make your heart break…over and over again. She is so determined not to allow Summer (aka Ryan) back into her life that you just may scream at your kindle and throw it across the room!  I think if I was in her position I wouldn’t have protested so darn much.  That was my only draw back with the book. She just wouldn’t let go and go with her feeling.  She was almost ready to relent a few times and I was on the edge of my seat! I knew that when and if she relented, their would be some FIREWORKS.

Then we have this man Summer.  He is determined to win back Carrie Ann.  The moment presents itself and they have the opportunity to be alone. They HAVE to work it out.  Summer made me swoon quite a few times.  He was always so respectful of Carrie Ann. He didn’t pull the “alpha male” you might expect from this Hollywood superstar.

Like I said, take the time, read this book. You will not be disappointed!

Carrie Ann tugged the earbud free from her ear, tossing the handsome young man a small smile. “Sorry, I couldn’t hear you. What did you say?”

He crossed a lanky somewhat defined arm in front of her, casually gripping the handlebar of her bike. “I said, you must be exhausted—” Before she could reply he continued, “—from running through my mind all day.”

Surely she must’ve heard him incorrectly. He was probably fifteen at most sporting a baby face and a patch of ten whiskers on his chin. Her brows tucked into a furrow. “Excuse me?”

A dose of youthful overconfidence drifted over his mouth in a sharp grin. “I seem to have forgotten my number. Can I have yours?”

“My phone number?” Carrie Ann scanned the near vicinity, row after row of workout equipment, for the practical jokester responsible for the madness. “Ha ha. Very funny. Who put you up to this?”

Her amusement only encouraged the boy’s macho bravado. “No one put me up to anything. I need a date. I just got into LA and I’ve got this Red Carpet event—”

“A date?” she scoffed at the ludicrous suggestion. Though she looked young for her age, Carrie Ann was still all of thirty-four years old.

“Yeah, you know. A date. You, me, hundreds of fans screaming as we stroll down the Red Carpet.” His voice cracked emphasizing the words Red Carpet…for the second time. A self-absorbed twinkle gleamed in his brown eyes as if he expected her to melt and drop to her knees right there in the gym.

“I’m totally serious. My uncle has this movie premier and I can’t just bring anyone.” A chunk of blond hair fell on his forehead and he flipped his head to the side. My date needs to be…hot, and well, you’re the hottest girl I’ve seen since I got to LA.”

She sneered at the absurdity. Silliness turned to annoyance. Carrie Ann switched gyms a few months back, paying out the nose to invest in her fitness and more importantly her privacy. Her last gym was more crowded than a cattle call casting session.

Carrie Ann rolled her eyes. She moved around him, gathering her workout towel and reaching for her bag. “Look kid, you seem real sweet, but—“

“You’re right about one thing.” A familiar voice, deep and perfectly modulated, approached from behind. “She is the most beautiful woman you’ll ever lay eyes on. But, you’re reaching for the stars with this one, Drew. She’s a heartbreaker.”

An ice cold tickle ascended up her spine raising the hair on the back of her neck. Her head snapped, glancing over her shoulder, colliding with a pair of rich amber eyes from her past. Without breaking eye contact, Ryan Summer strolled right into her personal space sporting athletic shorts, a fitted muscle shirt and a killer smile.

Nowadays, most people knew the Hollywood heartthrob as Ryan. Just Ryan. No last name needed. But after nearly a decade of blockbuster hits and infamous relationships that skyrocketed his success into superstardom, to Carrie Ann, he was still just Summer. Her old college flame.

“Funny, I could say the same about you,” she countered his jab, marshalling a bit of annoyance in her tone to combat the rush of heat spreading to her already pink cheeks.

A sexy smile caught the curve of his wide firm mouth. “Hello, Red.”

“Hello, Summer.” Carrie Ann tossed a trivial nod toward the teenager. “Who’s this? Your new apprentice?”

“Apprentice?” Moving a step closer, he dragged his fingers through the short cropped layers of sandy blond hair. “This is Mark’s boy. Do you remember my nephew, Drew?”

“Your brother’s boy?” she questioned in surprise. Avoiding the view of his bicep curling into the size of a softball, Carrie Ann ran a quick scan over the young man at his side. “Whoa, you had to be four or five years old the last time I saw you.”

“I don’t remember meeting you.” Drew’s eyes flickered with bemusement and optimism.

She extended her hand. “I’m Carrie Ann. I knew you when you were—“

“You’re Carrie Ann? The Carrie Ann?” The boy spun toward his uncle, his blue eyes broadened in disbelief. “The One?”

Her stomach twisted hearing the title. A flash of perspiration instantaneously flooded her palms. Before she had time to renege on the clammy greeting, Drew clasped her hand, giving it a polite shake.

A low rumble of laughter simmered in Summer’s chest and a rosy shade of red burnished high on the bridge of his nose. He nodded, “This is The Carrie Ann. The One who got away.”

No matter how many years had passed, it never got any easier to see him. Each time she did, she suddenly found it harder to breath.

The pounding of her heart quickened as her gaze slipped over his rugged well-defined features. A three day scruff accentuated the slight dimple at the bottom of his chin. The disheveled layers of hair were wet from exertion near his temple and nape. Time had been very good to him.

She felt the warmth of his hand close around the back of her bare arm. The early morning stubble of his beard brushed against her cheek as he leaned closer pressing a small kiss near her temple. Carrie Ann squirmed at his nearness, ducking to the side attempting to put some space between them.

“I’m…I’m all sweaty,” she insisted breathily.

“It’s okay,” he murmured softly in her ear. The heat of his breath brought chill bumps to the damp skin near her neck. “I remember enjoying you all sweaty.”

Ryan’s golden eyes locked onto hers, anchoring her feet to the floor. The penetration of his stare momentarily tied her tongue in a knot, turning the awkward moment even more difficult. Carrie Ann hadn’t bumped into Ryan in at least three years and she hadn’t seen him covered in sweat in ten. An image of him, gloriously naked, flashed in her mind and her thighs. Frustration mounted as her body willingly betrayed her.

Carrie Ann’s jaw set rigid contemplating the idea of flipping off her hooha for its insubordination.

“That was a long time ago,” she snipped abruptly.

Tags: A Taste of SummerBeverly Preston