Before We Were Strangers by Renee Carlino 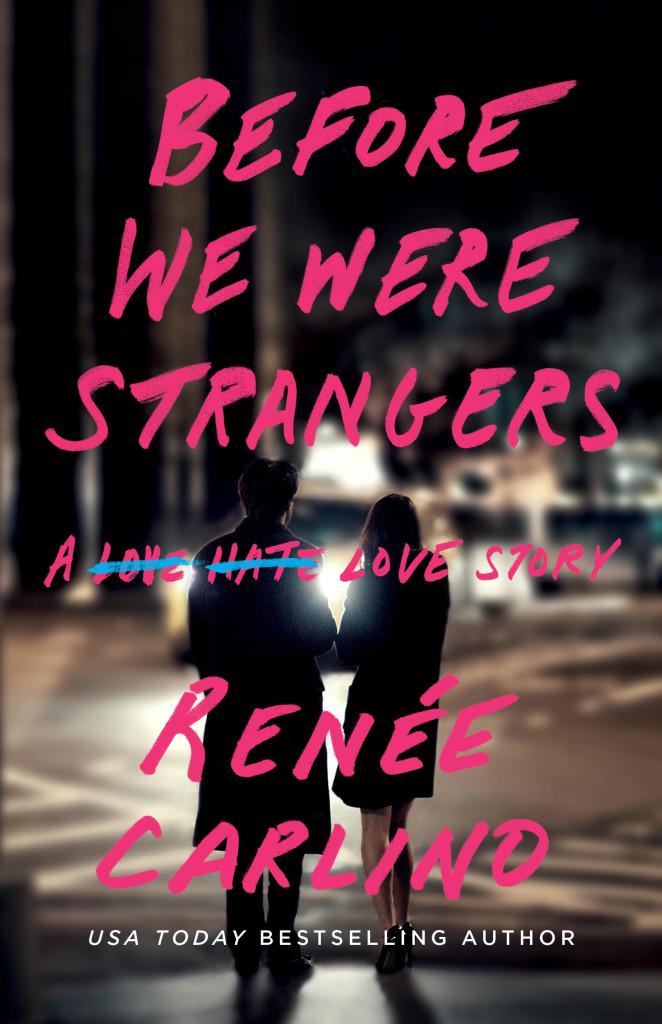 From the USA TODAY bestselling author of Sweet Thing and Nowhere But Here comes a love story about a Craigslist “missed connection” post that gives two people a second chance at love fifteen years after they were separated in New York City.

To the Green-eyed Lovebird:

We met fifteen years ago, almost to the day, when I moved my stuff into the NYU dorm room next to yours at Senior House.

You called us fast friends. I like to think it was more.

We lived on nothing but the excitement of finding ourselves through music (you were obsessed with Jeff Buckley), photography (I couldn’t stop taking pictures of you), hanging out in Washington Square Park, and all the weird things we did to make money. I learned more about myself that year than any other.

Yet, somehow, it all fell apart. We lost touch the summer after graduation when I went to South America to work for National Geographic. When I came back, you were gone. A part of me still wonders if I pushed you too hard after the wedding…

I didn’t see you again until a month ago. It was a Wednesday. You were rocking back on your heels, balancing on that thick yellow line that runs along the subway platform, waiting for the F train. I didn’t know it was you until it was too late, and then you were gone. Again. You said my name; I saw it on your lips. I tried to will the train to stop, just so I could say hello.

After seeing you, all of the youthful feelings and memories came flooding back to me, and now I’ve spent the better part of a month wondering what your life is like. I might be totally out of my mind, but would you like to get a drink with me and catch up on the last decade and a half?

A top pick of 2015!
Before we were strangers is my second Renee Carlino book. My first was Nowhere but here and I LOVED IT. I knew she was special just from one book. I adore her fluidic writing style. Her stories are so enchanting, they imprison not only your mind, but your heart as well. This lady knows how to write pure romance and infinite love. She writes about seemingly real people with realistic plots. No fluff, no bull!

Before We Were Strangers was shear perfection! It is a timeless and epic love story. I have a great affection for this storyline and it’s characters. Matt & Grace will always hold place in my heart. They will have you giddy, emotional and falling in love, over and over. Matt had me from hello. He is everything you could ask for in a book boyfriend. This book comes in three exquisite parts… Present, past and then back to present. I am a huge fan of books that volley this way. If they are done right, they give you a 360 degree view of the story. This one was done faultlessly. I especially loved the past, when they were in college. The innocents and wonder of falling in love was done magically. Their adventures had me cracking up and transported me back to my own college years. So much fun! In the present, it’s a whole new ballgame… my heart literally ached for them. You could feel their longing for each other. This book keeps you engrossed with it’s unpredictability. I found the dialogue amongst all the characters outstanding and witty.

The icing on the cake for me was the book is based in my city. Being a lifelong New Yorker, I found Renee’s depiction of NYC spot on. She captured the essence of the city. She was so detailed in her description, even if you have never been to New York you will feel like you are there.

This book has it all. DO NOT MISS THIS ONE! Fabulous job Renee. You are one of the great ones! Keep going…..

I was given an arc of Before We Were Strangers by Renee Carlino for review for Blushing Babes are Up All Night Book Blog. 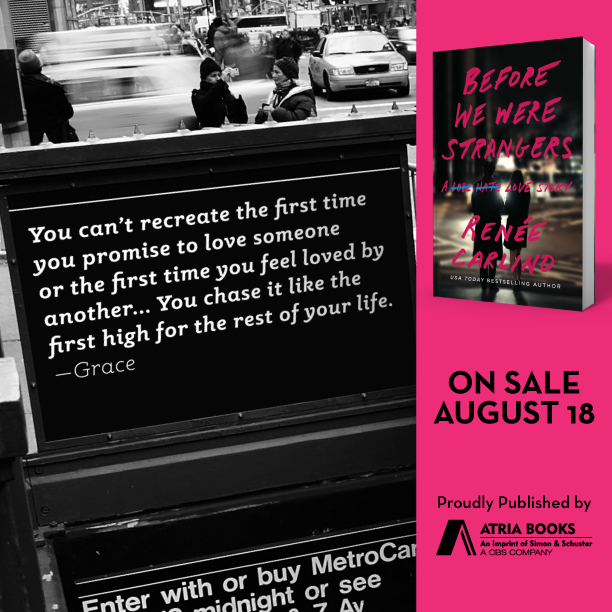 The present is our own. The right-this-second, the here-and- now, this moment before the next, is ours for the taking. It’s the only free gift the universe has to offer. The past doesn’t belong to us anymore, and the future is just a fantasy, never guaranteed. But the present is ours to own. The only way we can realize that fantasy is if we embrace the now.

I had been closed off for a long time, and I hadn’t allowed myself to imagine the future because I was still stuck in the past. Though it was impossible, I had tried to re-create what Matt and I once had. I wanted nothing else; he was all I could imagine.

But Orvin once told me that time is the currency of life. And I had lost so much of it. It was that idea of lost time that finally made me realize I needed to move on, that I would never have what I once had with Matt. I had to mourn our relationship and move on.

At least, that’s what I told myself.

Two months ago I was walking around in a thick fog of regret. I was going through the motions but wasn’t feeling anything. I’d stare at my new wrinkles in the mirror and wonder where they came from. I wasted more time, repeating the same thing day in and day out, barely present in my own life. I wasn’t looking to break out of the cycle in search of anything meaningful.

Until I saw Matt in the subway station.

Everything changed. I could see in color again, every image vivid and crisp.

Over the last fifteen years, the pain of what had happened to us waxed and waned. Many times I tried to force myself to stop thinking about him, but there were too many reminders. I thought, if I ever saw him again, he’d look right through me, like I was a ghost from his past. That’s how he made me feel that summer after college: someone who no longer existed.

But when I saw him in the station, his eyes locked on mine. He recognized me instantly, and all I could see in his face was pure wonder. It was like he was seeing the sunset over the ocean for the first time. As my train disappeared into the tunnel, his expression turned to desperation, and that’s when I knew there was a missing piece to our story. What was behind his desperation? What had happened to him in the last fifteen years that would send him running down the platform, his hand outstretched, his eyes full of longing?

I needed to find the answer. I had an idea of where I could find Matt, but I was too scared to look. 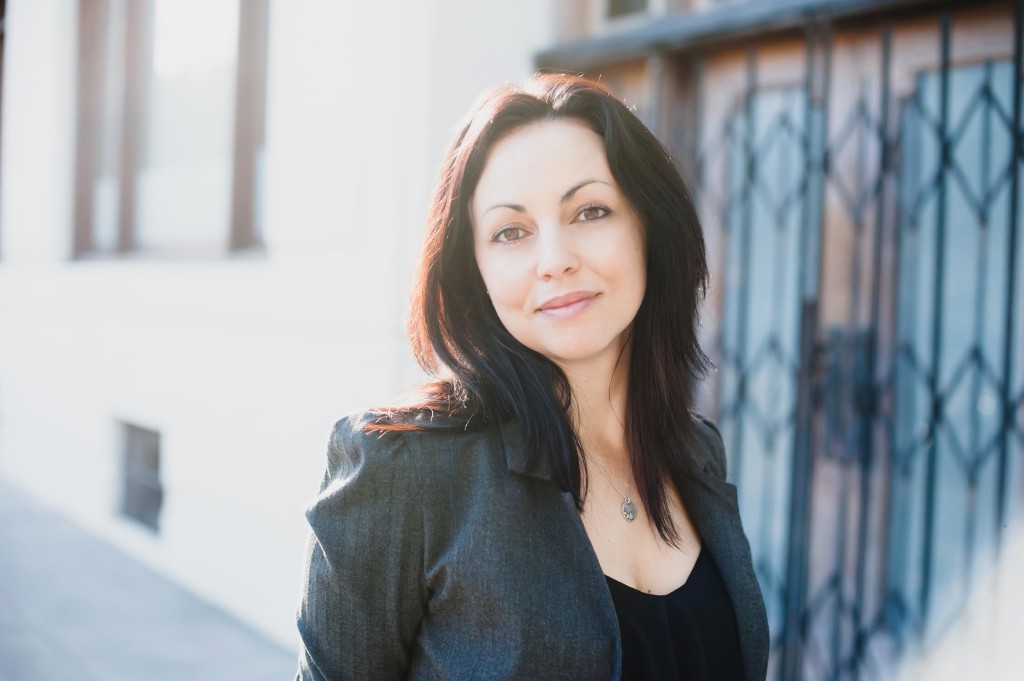 Renée Carlino is a screenwriter and bestselling author of romantic women’s novels. She lives in Southern California with her husband, two sons, and their sweet dog June. When she’s not at the beach with her boys or working on her next project, she likes to spend her time reading, going to concerts, and eating dark chocolate.

Tags: Before We Were StrangersRenee Carlino