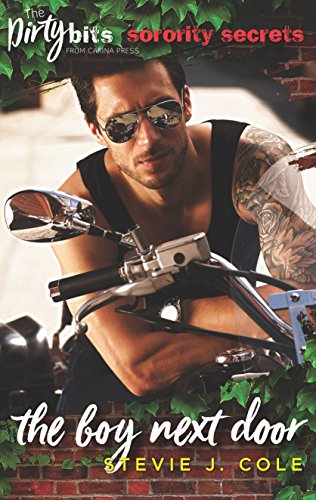 The Boy Next Door

Sorority Secrets: The virgins of Beta Kappa Nu would do anything for each other. Even auction off their most valuable asset…

I’ve been in love with Emma since we were thirteen years old.

That part is real. But nothing else they say about me is true.

The way she looks at me from across the room, how she makes my old T-shirts look good, how perfect she feels when she’s in my arms. That’s what I want to picture when I think about Emma. Not a crazy auction where she gives it up to some random creep.

Despite the tattoos, despite the rumors, despite my reputation as a class-A player—there’s never been anyone else. In my bed or in my heart.

This book is approximately 19,500 words.

For those times when size does matter. The Dirty Bits from Carina Press: quick and dirty, just the way we like it.

One-click with confidence. This title is part of the Carina Press Romance Promise: all the romance you’re looking for with an HEA/HFN. It’s a promise!

Emma and Evan have been friends since they were swinging on swings and playing in sandboxes. They grew up next door to each other, and they have always been close. The only thing is… they both have been keeping how they felt about each other a secret. When Evan finds out what Emma is about to do, it has him steaming mad, and he comes in like a knight in shining armor. Emma is a bit naive in the story. I was very surprised she was going to go through with certain situations that were so out of character for her.
I read a lot of Stevie J. Cole. I enjoyed this story as well. It was different than what I’m used to, but it was a good change of pace.
Share