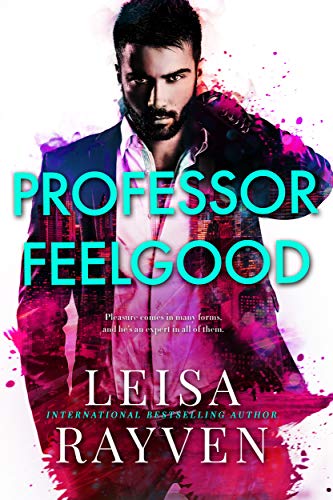 What’s a girl to do when a man who’s countless shades of wrong feels oh-so-right?

Ambitious book editor Asha Tate is a hopeless romantic. Despite her mediocre track record with men, she believes in swooning, sighing, and the everlasting love of true soul mates. Sure, sex is okay, but she’s not someone who’s ever been driven by her animal urges.

When Asha stumbles upon the scorching hot Instagram feed of someone calling himself Professor Feelgood, she falls in lust for the first time. Not only is she left panting over photos of the professor’s insane body, but his angst-filled poetry about losing his one true love speaks straight to her soul.

Desperately in need of a bestseller for her struggling publishing company, Asha knows the professor’s potential to sell to his millions of loyal followers could be the lifeline her bosses need. However, the ink is barely dry on a book deal before she realizes she’s made a terrible mistake. Sure, the professor is incredibly talented and sexier than any man has a right to be, but the man behind the persona isn’t at all who she pictured. In real life, he’s intense, arrogant and infuriating, and his uncanny ability to rub her the wrong way turns her dream project into a total nightmare.

Knowing that the professor is everything she doesn’t want in a man should help Asha ignore her occasional urges to mount him, but she quickly learns that explosive, unwanted chemistry can make even smart people do stupid things.

Asha Tate wants it all. Love, passion, romance with the man of her dreams. So why does she find fault with every boyfriend once things start to get serious? Why is she lusting for the Instagram hottie whose heartfelt poetry is burrowing into her soul? Her career, her promotion and her employer – Whiplash Publishing – hinges on finding the next bestseller.

Maybe Professor Feelgood is just what the doctor ordered. Except that he is an enigma. His flowery, angsty words are in direct contrast with his demeanor. The off the charts chemistry between them is impossible to ignore. There is something going on beneath the surface. Asha feels it and honestly so could I as I continued reading.

Professor Feelgood was funny, angsty, swoony and oh so romantic fun. The poetry was just one more level of awesome. I totally fell for these two people fighting a losing battle to a connection that was beyond words. I loved how this totally did not go the way I thought it would. Joanna is hysterical. I also loved getting glimpses of Max, Eden and Nan from Mr. Romance. Leisa Rayven skill is undeniable! Her gift shines all through this roller coaster ride.