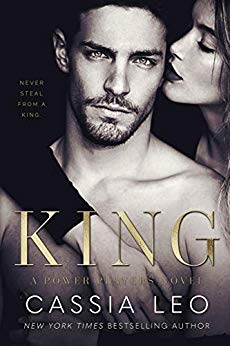 All I had to do was get back the suitcase full of cash.
Falling in love with the girl who stole it was not part of the plan.

From New York Times bestselling author Cassia Leo comes a romance about taking chances, double lives, and falling madly in love with the one person who wants you dead.

A missing girl. A handsome neighbor. A mysterious suitcase. A very unexpected romance.

Down on her luck in Las Vegas, Isabel “Izzy” Lake turns to the regulated prostitution industry. But her first day on the job ends abruptly when her client dies, and his suitcase contains over a million dollars.

Izzy takes the money and sets off to a small town on the other side of the country, where she attempts to live a low-profile life. A few weeks into her new country girl lifestyle, she finds owning an old fixer-upper isn’t so fun when you’re a city girl with zero DIY skills.

Izzy’s handsome new neighbor, Kingston Jameson, is all too eager to fix her leaky faucet and warm the cold side of her bed. It’s not long before she finds herself falling for King. But is he really the sweet-talking country boy he claims to be, or has he come to collect more than her heart?

Kingston “King” Jameson knew he shouldn’t have let Garrett pick up the suitcase full of cash. And he sure as hell never expected Garrett to die at a brothel and get robbed by a prostitute.

King needs to get the suitcase – and the secret item hidden in the lining – before his boss kills him.

He has one problem: The girl who stole the suitcase has hidden it very well. She left her entire life behind in Las Vegas. She’s got nothing left to lose. If King wants that suitcase, he needs to get close to her. Close enough to watch her every move. To know her deepest secrets.

Okay, he has two problems: He’s also fallen in love with the girl he’s supposed to kill.

Kingston “King” Jameson was a soldier.  As a civilian, his “construction company” is laundering money for a dirty politician.  King’s best friend, said politician’s son, ends up dead in an empty hotel room.  A suitcase carrying over a million dollars of his daddy’s money is missing.  King has to get it back and dispose of the person that stole it.
Isabel “Izzy” Lake has no resources.  She turns to the oldest profession which is easily done in Las Vegas.  Then her first customer overdoses and dies.  No way she can call the police and get caught in the middle of this mess.  Izzy has to run!  The dead guy had a suitcase full of money and just like that her decision is made.
King moves in down the road from Izzy as promptly inserts himself into her life.  Turn out there is more at stake here than money.  The suitcase is holding one other secret.  He has to find the suitcase and kill Izzy.  Easier said than done when the thief makes his heart go pitter patter.
Izzy knows that she can’t afford to trust anyone.  Most especially her sexy new neighbor, who is quickly becoming indispensable to her.  How is she supposed to stop thinking about how his hands would feel all over her body.
I loved the premise and expected it to quickly reel me in.  However, it all felt too easy.  King found her – too easy.  She trusted him – too easy.  They fell in love – too easy.  He lied to the police – too easy.  King was supposed to be this tough enforcer but he never came across that way to me.  It never felt like Izzy was in danger from him.  Izzy, on the other hand, was smart, feisty and funny.  She was prepared to put a hole in King if necessary.
The angst that is usually a part of this kind of love story was not there for me.  Though it is standalone, I believe that it should be read as part of the Power Play series.  Personally speaking, I wish King was longer than its 200 pages.  It would have allowed for a richer development of the storyline and their and relationship.  I enjoyed this one but overall wanted more.