#AvailableNow~~Ike and Kay by James MacManus 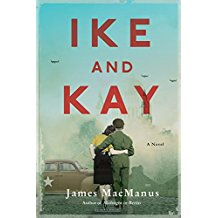 In his latest historical novel Ike and Kay, acclaimed author James MacManus brings to life an unbelievably true and controversial romance and the poignant characters and personalities that shaped the course of world history.

In 1942, Kay Summersby’s life is changed forever when she is conscripted to drive General Eisenhower on his fact-finding visit to wartime London. Despite Eisenhower’s marriage to Mamie, the pair takes an immediate liking to each other and he buys Kay a rare wartime luxury: a box of chocolates.

So begins a tumultuous relationship that, against all military regulation, sees Kay traveling with Eisenhower on missions to far-flung places before the final assault on Nazi Germany. The general does dangerously little to conceal his affair with the woman widely known as “Ike’s shadow,” and in letters Mamie bemoans his new obsession with “Ireland.” That does not stop him from using his influence to grant Kay citizenship and rank in the US army, drawing her closer still when he returns to America. When officials discover Eisenhower’s plans to divorce from his wife they threaten the fragile but passionate affair, and Kay is forced to take desperate measures to hold onto the man she loves . . .

Based on the scandalous true story of General Eisenhower’s secret World War II love affair, Ike and Kayis a compelling story of love, duty, sacrifice, and heartbreak, set against the backdrop of the most tumultuous period of the twentieth century.

When I read the synopsis for Ike and Kay, I thought I was reading one of my all time favorite subgenres; wartime romance. Seriously, if a book is set in WWI or WWII and has a tragic romance with star-crossed lovers, I will read it cover to cover. And that’s what I thought Ike and Kay would be about.

Going in, I didn’t know that there was a supposed affair between Eisenhower and anyone! I certainly never considered that one of the most powerful military officers in WWII took a shine to a British driver and basically moved her into the positions of driver, secretary, hostess and confidante during the course of the war. Kay Summersby was all of those to Ike and many of the officers who worked with him knew it. Sounds like a wartime romance if ever there was one!

Sadly, I didn’t get that from the book. I never felt like I really got to know Kay or Ike for that matter. I wasn’t able to relate to Kay as a woman and I definitely couldn’t get into Eisenhower’s head to know what his true feelings were. I never caught their attraction to each other, or the reason why their relationship endured over the course of the war. And all of that was disappointing.

I can tell you that what saved this book for me was the research the author did and the historical accuracy of the events surrounding Ike and Kay’s time together. Great care was obviously taken to achieve such organization of overlapping events in different parts of the world each with numerous players. I was able to move from one historical event to another and keep track of who was where and fighting whom. As someone who isn’t a history buff that was very important. I will admit that there was quite a bit that I didn’t know about WWII. I had no idea that women were ambulance drivers during The Blitz. That’s actually something I want to learn more about.

Overall, Ike and Kay was a letdown for me because it wasn’t the historical fiction/romance that I was expecting. That said, the book is extremely well-written and easy to read.

James MacManus is the managing director of The Times Literary Supplement. He is the author of six novels, including the historical novels Black Venus, Sleep in Peace Tonight, and Midnight in Berlin.