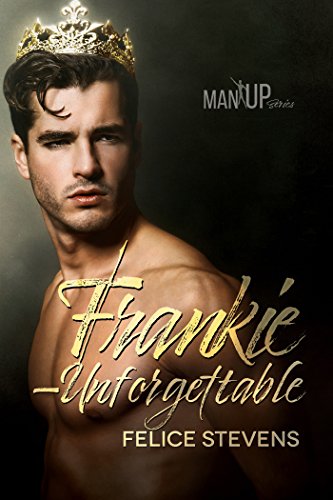 No one understands why I love him.
Why I need him.
Why I took him back.
But they don’t have to.
I know.
Despite the hurt and the heartache, I see beneath his skin.
And I’m different now.
No more Flirty Frankie. I’m done with being King of the club.
My dreams have changed, and so have I.
I’m stronger.
I believe in myself.
And I’m a hell of a lot smarter than a year ago.
Now it’s his turn to show me the man he really is.
To prove it.
I’ve always loved him.
But that’s not enough.
I need to learn to trust him.

No more excuses.
No more chances.
I make this right or lose him for good.
I have to do this.
No one has ever believed in me but him.
No one has ever wanted me but him.
I can’t let him down.
I won’t.
I can’t let myself down.
I’m trying, but it’s so damn hard.
No matter what they throw at me, I’m stronger.
And I’m going to make it.
I’m on my way.
With Frankie by my side.
I can see the future.
I have a future.
Us. Together.
Forever.

When I first heard Felice was going to redeem Frankie’s abusive ex-boyfriend Aaron, I was more than skeptical. But I figured if anyone could pull it off, I knew Felice would…. Sometimes people are really just a product of their circumstances and upbringing…. Not that we should condone their actions, but it definitely makes it more understandable. Aaron had a horrible past and many demons. He was on a self destructive path and taking Frankie with him. After an awful event, Aaron ended up in jail. Jail was for the best. It needed to happen to him, so he could see the error of his ways. If he had continued on the path he was on, his life would have been completely ruined. Sometimes the worst thing that happens to us turns out to be a blessing. I felt Aaron’s remorse and his love for Frankie throughout the book. Both guys had changed so much in the year they were apart. I enjoyed their self discovery. There was a lot of apologizing on both sides. Aaron had a lot to prove to everyone, especially Frankie and in the end, he did just that! I would have liked a bit more romance and angst, but overall Aaron and Frankie’s story was true to them. Felice added a wealth of storyline for rest of the guys from Man Up… I learned Cort is the lonely sweet southern gentlemen of the group, while James keeps getting more complex mysterious and yummy! I am loving this series and all the boys. Once again, I am looking forward to the next book.