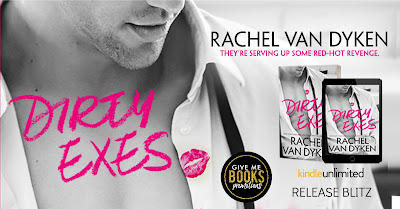 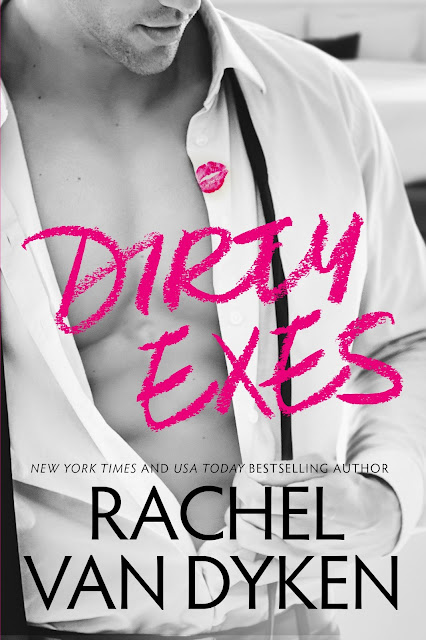 Blurb
They’re serving up some red-hot revenge. A sizzling
series from #1 New York Times bestselling author Rachel van
Dyken.
Blaire has never
quite gotten over Jessie Beckett, the ex–NFL star whose kisses were hot enough
to ignite the entire Eastern Seaboard. When he chose work over her, Blaire was
left brokenhearted. Why else would she have married a skeezy two-timer, just to
divorce him less than a year later?
Now Blaire is
getting even by becoming one half of Dirty Exes, a PI firm fully committed to
humiliating cheating jerks. If only the new jerk she’s been hired to uncover
wasn’t Jessie Beckett himself.
Exposing Jessie
isn’t going to be easy, especially when she still daydreams about his sexy
smile. Further complicating matters is Colin, Jessie’s best friend. He’s
gorgeous, a little bit cunning, and willing to help Blaire get the inside scoop
on Jessie—for a price.
Now caught between
two men—one totally right and the other totally wrong—Blaire
will need to decide just how much she’s willing to risk…and whom she’s willing
to risk it for.

I loved this book! It was funny and sexy with a side of drama! The prologue was hilarious! Blaire and Isla have been hurt by their cheating exes. They turn lemons into lemonade by starting Dirty Exes, a PI firm that goes after cheaters. They gather evidence and often times post it to Facebook live, humiliating the cheater. Although they are successful, they have anger and trust issues because they were cheated on.

“I was so focused on retribution, on not focusing on the past, that I was barely staying sane.”

Things get interesting when they are hired by Veronica Beckett. She is married to ex-NFL player Jessie Beckett, Blaire’s first love. Jessie broke Blaire’s heart when he was traded by the NFL. He never asked her to come along. Brokenhearted, Blaire married a “safe” guy, who cheated on her. Blaire insists she can be professional and handle the situation with Jessie as a client. Jessie’s best friend, Colin, is an added piece of the puzzle, and nothing is what it seems! Is he friend or foe?

Rachel Van Dyken takes us on a wild ride! Husband’s, best friends, wives….cheater or not? The story takes a few turns that I did not expect. Perception versus reality. Fake versus real. Some really funny situations and some hot sexy time as well! There is also lots of banter between all of the characters. I was very surprised by the outcome.

“Sex always makes things better, especially angry sex where I let you slap me.” He grinned.”

“It was hard not to smile.”

Next up…. Isla. Will Blaire’s tough-as-nails partner be able to move forward….. 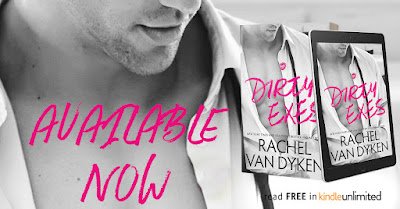 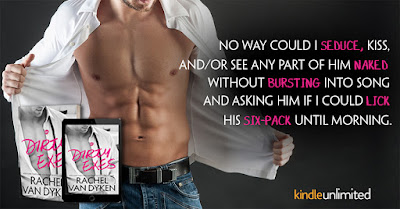 Excerpt
“What’s with you and nakedness?”
“It’s how we’re born.” I smirked. “Easy.”
“I was also born with crooked teeth and no hair, so I should
revert back to that?”
“Actually,” I licked my lips, “You were born without teeth,
unless God made you extra special…” I pushed away from the counter. “Did he?”
She plastered her ass against the door and looked up at me.
“Did he what?”
“Make you extra special?”
“Why are we in the bathroom?”
“It think it was a power move on your part, lock me in here,
tell me how things are going to be, maybe add in a spanking and teach me my
lesson—“
“—why do I even talk to you?” Blaire wondered out
loud.
“Because I’m not boring. Like some football players…”
“You never played football.”
“Guilty. I was more of a rugby sort of guy, what prick wears
padding?”
She eyed me skeptically, “No offense but don’t Rugby players
have a bit more…” She gulped and looked down past my waist, “Okay this is
coming out wrong but… thicker—“
The more she talked the redder she got like she couldn’t
bring her eyes up any higher without doing permanent damage to her
retinas.
I grinned so hard my face hurt. “Thicker?”
“Um,” She pressed a hand to her forehead. “Legs, damn it,
legs!”
“Totally thought you were going somewhere else with that,
spy girl.”
She made a face and crossed her arms. “Stop calling me that,
it makes me feel young, stupid, and inexperienced.”
“Like a virgin?” I said helpfully. “Touched for the very
first time?” She muttered
out a dear God what did I do in a past life to deserve him.
I took it as a compliment and pressed my hands against the
door on either side of her head. “I think you’re asking yourself the wrong
question.”
She frowned, “I didn’t say anything.”
“No, but you’re thinking it.” I whispered. “You’re wondering
what the hell you’re doing in here instead of out there.”
She swallowed and looked away.
I tilted her face back towards mine, my finger and thumb
cradling her chin. “The past always looks better through I got fucked over
glasses.” I got a bit closer, so close I could taste the mint from her gum.
“You think you still want him. You’re wrong.”
She inhaled sharply. “You don’t know me.”
“I know you blush from here,” I tapped her chin then ran my
hand down the slim column of her neck until it pressed against her chest. “To
here, when you get embarrassed,” I leaned in and whispered in her ear. “Or
turned on.”
She blushed immediately.
I kissed her neck and said. “Told you so.”
She shoved me away so fast I almost got whiplash. “This,”
She took another deep breath. “This is business.”
“This?” I pointed between her and me. “Is more than
business, but whatever helps you sleep at night spy girl… just be sure to let
me know when you want it to get more personal because I’d love to see every
inch of blush infused skin, and I’d love to eat my way—“
“—No.” Shed jammed her finger at me. “When I called you, you
literally had to kick a woman out of bed.”
“Two, actually.” I shrugged, “Not that it matters.”
“See!”
“So? I like women.”
“I’m not them.”
“No,” I said seriously. “You’re not. If you were, this would
already be finished.”
“There is no… this, or us, beyond you helping me get info on
Jessie and Vanessa.”
“Sure.” I nodded. “Fine.”
“Why don’t I believe you?”
“Because I just lied.” I admitted with a grin, “But at least
you know where I stand.”
“Oh yeah? Where’s that?”
“In front of you.” I smirked. “Obviously.” I walked towards
her again and reached for the door knob, “Look I’m just a guy standing in front
of a girl asking her to—“
“—finish that sentence and I’m going to show you my kung fu
skills.”
Author Bio

Rachel Van Dyken is the New York Times, Wall Street Journal,
and USA Today Bestselling author of regency and contemporary romances. When
she’s not writing you can find her drinking coffee at Starbucks and plotting
her next book while watching The Bachelor. She keeps her home in Idaho with her Husband, adorable son,
and two snoring boxers! She loves to hear from readers!
Want to be kept up to date on new releases? Text MAFIA to
66866!
You can connect with her on Facebook or join her fan group
Rachel’s New Rockin Readers. And make sure to check out her website.
Author Links
FACEBOOK
WEBSITE
NEWSLETTER
INSTAGRAM
TWITTER
AMAZON
GOODREADS
RACHEL’S ROCKING READERS
Share