#AudibleReview~~Where it all Lands by Jennie Wexler 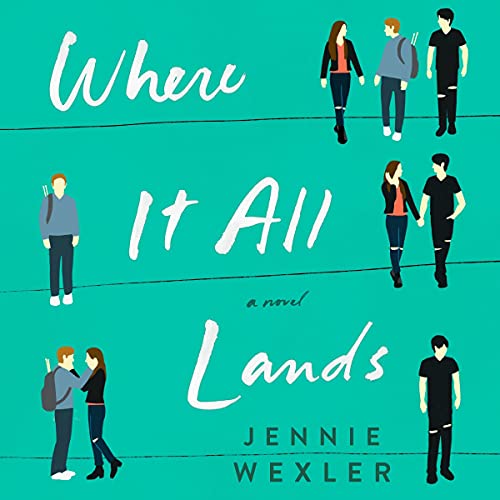 I typically do not read YA but this audible caught my eye.  The “What if’s” in life are what this book is about.  How 2 boys made a decision to flip a coin to see who would ask out the new girl and with each side, there was a totally different story.

I wouldn’t say this is a love triangle but there is a question as to who Stevie “should be” with.  I had my favorite but that doesn’t really matter because in the end – Stevie was with the one she should have been all along (in my opinion).

Two best friends who have been there for each other for their entire lives, have a moment that will forever change their lives.  Stevie has spent her life moving from place to place and finally finds herself somewhere she wants to stay and friends that she hopes will last a lifetime.

This book is read in 3 parts – one part where she is with Drew, one part where she’s with Shane, and then part three – which is after!    I listened to the audible and I think the narrators were fantastic.  I would say at times I wish the male narrator sounded a little younger as these young men were in high school and the narrator sounded older than high school age.  It didn’t detract from me enjoying the audible.

Stevie Rosenstein has never made a true friend. Never fallen in love. Moved from city to city by her father’s unrelenting job, it’s too hard to care for someone. Trust in anything. The pain of leaving always hurts too much. But she’ll soon learn to trust, to love.

Drew and Shane have been best friends through everything. The painful death of Shane’s dad. The bitter separation of Drew’s parents. Through sleepaway camps and family heartache, basketball games and immeasurable loss, they’ve always been there for each other.

When Stevie meets Drew and Shane, life should go on as normal.

But a simple coin toss alters the course of their year in profound and unexpected ways.

Told in dual timelines, debut author Jennie Wexler delivers a heartbreaking and hopeful novel about missed opportunities, second chances, and all the paths that lead us to where we are.