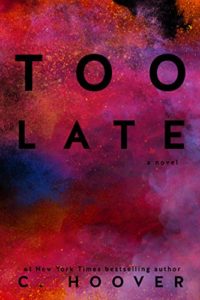 Too Late by C. Hoover

Sloan will go through hell and back for those she loves.

And she does, every single day.

After finding herself stuck in a relationship with the dangerous and morally corrupt Asa Jackson, Sloan will do whatever it takes to get by until she’s able to find a way out.

Nothing will get in her way.

Nothing will get in his way.

This book was originally written as a side project by the author. Please note that the content of this book is more graphic than the content of other books written by this author, hence the distinction between the names. This title is recommended for mature audiences only due to extreme graphic content. Recommended for listeners 18+.

Warning: for listeners who might be triggered by sensitive subject matter, this book contains scenes that depict rape, murder, and other graphic violence.

First things first – the warning – have you ever seen a warning on a Colleen Hoover book before? No – well this one needed it. This book is so different from other Colleen books but that’s not a bad thing. We loved the YA feel of Slammed and Hopeless, we ventured into a more NA feel with Ugly Love and Maybe Someday and It End With Us, but this book is so out of the norm for Colleen.

I have often joked that there is no pulsing and bulging members in Colleen books, well – apparently when you write your book on Watt Pad and you are C. Hoover (aka Colleen Hoover or CoHo as she’s often called) – you have some bulging and pulsating going on. This book pushed my boundaries but that’s something I love when reading (or listening in this case). I will read anything and everything that Colleen writes so I was reading these chapters are they were being uploaded to Watt Pad. I thought, yes thought, I had read the entire book. So when I hit a certain point of the audible I thought – this is almost over but low and behold – I had 4 hours more to go! I said – WTF Colleen. Colleen continued writing, allowing these characters to continue to “speak to her”. They didn’t hold back – not one little bit! The F word, is abundant in this book – 708 times to be exact), but I whole heartedly believe every one of them was necessary! – This book, this story, these characters deserve every word they spoke.

The epilogues were abundant, the prologue was perfection, the multiple POV’s were necessary, the present and past timelines brought it all together and made the story the masterpiece in which we expect from Colleen Hoover. There is intrigue, sex, drugs, alcohol, mental health issues, laughter, debauchery and sadness in this book – a beautiful melding of so many different experiences.

Take a chance, go for the different Colleen Hoover experience, but word to the wise – put on your headphones because there is some serious sexy and some serious cussing going on!!

WOW!!! THIS AUDIBLE IS AMAZING!
Narrated by Emma Hudson, Max Thomas and Ryan Gray, this was the first audible I had listened to that featured 3 narrators and I loved it. There is a voice for Sloan, Asa and Carter. The way the three voices come together to breathe life into Colleen Hoover’s fast-paced and suspenseful WattPad sensation Too Late is magical. Asa’s voice is PERFECTION. It’s sarcastic, aloof, snarky and slightly creepy with a slime-ball feel to it. Pretty much exactly what you want Asa to sound like. Carter’s voice is strong, comforting and sexy. It has an alpha feel to it which you need when you think of Carter. And Sloan was perfect, angst and fear and intrigue dripping from her inflection on almost every track. I loved it. I couldn’t stop listening. I listened while I cleaned, did house chores, drove in the car, and over my lunch hour. Any opportunity I got to slip on my ear buds, I flew into that world with abandon. PLEASE try this audible!

I can only hope that Colleen writes another book that is dark and unconventional from her other stories because she is insanely good at stepping outside her comfort zone. This review is going to cover the story line and the audible narration as well. This is also the first time I’ve “read” Too Late. (Meaning I didn’t read it in book format or on WattPad.)

This was the second audible I had listened to, and I truly did love it. The narrators did a very good job, and I especially liked Asa’s narrator. He was fabulous. He had the perfect amount of sinister in his voice to honestly give me a feel for a character that will stick with me. Of the three main characters, I felt he was the best written one, and I could not wait for Asa’s chapters (as sick as that is).

I had a hard time liking Sloane’s character in general, but I truly felt terrible for her. I understood a lot of her decisions, but I felt like she was so weak she could have avoided a lot of what happened to her. BUT there are so many people out there who are easily manipulated just like her and she rolled with the punches just in order to survive. As far as the narration of Sloane’s character is concerned, it was just okay for me. Emma Hudson seemed to sound “too old” for Sloane in my opinion, and she sounded very sarcastic when she spoke. It actually took me a long time to warm up to her narration.

As far as Carter was concerned, plot wise, I felt the investigation of Asa was a little weak. It just seemed to fall apart with such little explanation for such a long, ongoing investigation in one of the largest college drug rings in history. I felt that part of the story was lost and the romance took over. The narration worked though. Carter had a strong soothing voice and seemed to match that of an investigator’s. He really came through for Sloane and was an amazing hero in such a terrible situation.

Overall, fabulous. Again, I can’t wait to see more of this side of Colleen. 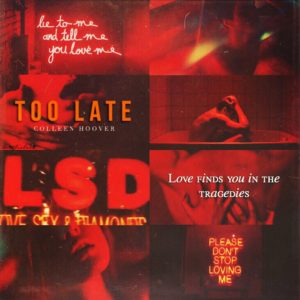