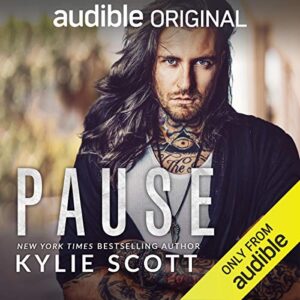 When Anna wakes up from a coma after a car crash, she discovers life has gone on without her. Her husband has been unfaithful—with her best friend—and she’s been long since replaced at work. While her old life is a distant memory, her new life feels like an empty shell. Then she meets the stranger who saved her life during the crash, and he changes everything.

Leif Larsen—tattooist, joker, and player—has his own scars thanks to the crash that put Anna in a coma. Helping her move on from her failed marriage, and create a new life, sounds like a perfect distraction. So when he needs a new roommate, he invites Anna to begin her new life with him.

Although their lives may have been put on pause, together they just might find a way to heal.

I have been a Kylie Scott fan since 2013 when she began the Stage Dive series.  I listened to another audible original (Repeat) in 2019 and low and behind Leif is brothers with our hero in Repeat. So he’s not really a new character but we get to know so much more of him in Pause.

Leif was involved in an accident and one of the other victims of the hit and run is Anna.  She was hurt worse than Leif and has just woken up from a coma.  Her life is in tatters and she befriends Leif.  He is a good guy…not the typical man for Anna but he understands her more than she can imagine and their relationship begins as friends and becomes more with time as they both see that they are meant to be together.  It’s a rough journey at times but the journey is often more important than the destination.  Kylie Scott once again gives us a strong female character and a sweet (but tough exterior) male character that perfectly matched together.

Andi Arndt always does a fantastic job of bringing characters to life with her narration.