Audible Review ~~ Grey: Fifty Shades of Grey as Told By Christian by @E_L_James 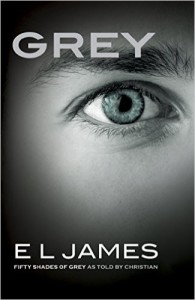 Grey: Fifty Shades of Grey as Told by Christian Audible

See the world of Fifty Shades of Grey anew through the eyes of Christian Grey.

In Christian’s own words, and through his thoughts, reflections, and dreams, E L James offers a fresh perspective on the love story that has enthralled millions of readers around the world.

Christian Grey exercises control in all things; his world is neat, disciplined, and utterly empty—until the day that Anastasia Steele falls into his office, in a tangle of shapely limbs and tumbling brown hair. He tries to forget her, but instead is swept up in a storm of emotion he cannot comprehend and cannot resist. Unlike any woman he has known before, shy, unworldly Ana seems to see right through him—past the business prodigy and the penthouse lifestyle to Christian’s cold, wounded heart.

Will being with Ana dispel the horrors of his childhood that haunt Christian every night? Or will his dark sexual desires, his compulsion to control, and the self-loathing that fills his soul drive this girl away and destroy the fragile hope she offers him?

This book is intended for mature audiences.

There was an outcry for this book and we waited and waited, then on June 18, 2015, in honor of Christian Grey’s birthday, EL James gave us what we were asking for. (So excited to say that Christian Grey and I share a birthday)

Many were unhappy with what she gave us, but I have to disagree.  I LOVED hearing everything from Christian’s POV.  It had been a while since I had read Fifty Shades of Grey, so it was so nice to hear it all again.  We get to hear exactly what Christian was feeling when he saw Ana, when he spent time with Ana and all their times in the “red room of pain” with Ana.  I loved hearing what he thought.

This POV gave me such a different perception of Christian. He was not the strong alpha male that he makes us all believe.  He questioned his “worth” so much.  He never thought he was enough for Ana and it made me sad. And holy moly, he was more of a stalker than we ever thought! And the flashbacks to his childhood crushed me.  You get a little more insight to why Christian is who he is. And like many have said…the last 3 chapters…just WOW!

Now, on the audible version of this book….

ZACHARY WEBER!  That’s all I needed to hear when this audible was being released! I was going to read or listen to this book either way, but once I hear Zachary’s name as the narrator, I pre-ordered!

I want to start a petition to have Zachary Weber’s voice dubbed into all the movies. His voice is just…perfection for me!  I think I may have loved the book even more because of his voice.

If you were unsure about reading Grey, think about trying the audible. I think you will be pleasantly surprised as to how enjoyable it is to listen to Zachary’s narration as Christian Grey!