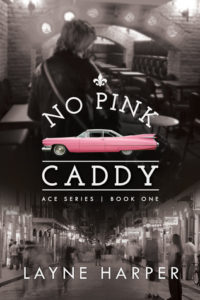 How fast can a pink ’57 Cadillac whisk me away from my dead-end life? Because my twenties have been less than what was promised in the college brochure.

Then one day, it happens. Instead of falling in love with my best friend like I was supposed to, I meet a rock star who happens to be a fan of my site, NoPinkCaddy.com. You’d think that would be where the story ended, but it’s actually just the beginning.

How does a southern girl from New Orleans, who just wants to make her own way in the world, merge her life with that of one of the hottest rock stars on the planet? Well, let me tell you, it’s not easy.
This book is recommended for anyone who refuses to take the easy road in life, and those girls who dream of falling in love with a rock star. It’s not all tight jeans and guitar serenades, but hot damn, there are some fun times along the way.

This book is recommended for readers over the age of 18.

Layne Harper introduces us to a new series, No Pink Caddy.Completely different from her previous books – The Infinity Series.

We meet MK, a 30 year old who refuses to take the easyroad in life. She is devastated when her college sweetheart dumps her so shestarts a blog to “connect with girls likeme – a bit lost.”  That was sevenyears ago! Her blog No Pink Caddy isreally popular and has spilled over into Twitter and other social media. Sheloves people watching, blogging, cooking & thrift shopping.

Her best friend Bella wants her to “settle” with herchildhood sweetheart, Tripp. The only problem – there is no chemistry betweenthem….

“Youhaven’t been on a date in months. You’re thirty. You want to be married andhave kids. What’s so wrong with Tripp? He’s a good-looking, self-made man, andmore importantly, one of the richest guys ever. You could do a lot worse.”

Along comes Aaron/Johnny. Famous rock star, goofy,thoughtful, romantic, hot, and recently out of rehab. He is in New Orleans torecord a new album but also to pursue MK. Aaron is a combination of hot &crazy. He reminds me a bit of Mal from Stage Dive who is always over the top& hyper!

And so it begins. MK doesn’t know that Aaron is a huge fanof No Pink Caddy. MK is funny, friendly, direct and caring. Aaron is romanticand a bit lost. We learn about his past and wow, just wow. I love the banterbetween MK & Aaron.

What comes next is a lot of ups and downs. You never knowwhat will happen or where the story will take you. It is emotional and has alot of depth. And then there is the cliff…

So now I have to wait!!! It was a crazy train that Iboarded, but I don’t want to get off!