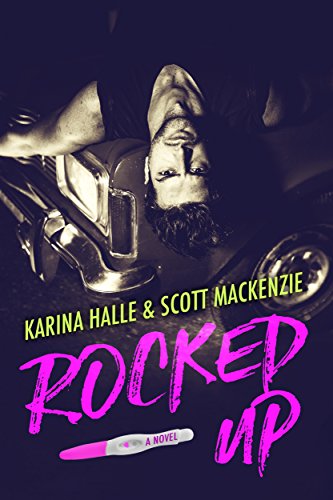 Rocked Up by Karina Halle

Rocked Up is a STANDALONE rockstar romance and the light, sexy, fun brainchild of the husband and wife writing duo, Scott Mackenzie and New York Times bestselling author Karina Halle.

I’ve been watching him since I was a teenager.
He didn’t notice me back then and it didn’t matter. Brad Snyder, guitarist and singer for one of the world’s greatest bands, was my entire life.
My father, the CEO of Ramsey Records, takes credit for all of Brad’s success, trying to control him in the same way he’s controlled me.
But I finally get an opportunity to prove myself.
To be wild.
To be free.
Today I’m auditioning to be the replacement bass player for Brad’s band. If I get the job, I’ll go on tour and work with Brad every day, in very close proximity.
There’s only one rule: he’s not allowed to touch the boss’s daughter.
Remember when I said that Brad never used to notice little ol’ me?
Well, Brad’s noticing me now.
In a way that’s going to get us both in trouble.
My name is Lael Ramsey and we all know how this will turn out.

Hot rock star books are one of my favorite tropes.

Brad is so not the normal rock star we are used to.  He’s not the man whore or the drug taking arrogant ass.  He’s a man who pretty much grew up alone, practically on the streets, fending for himself.  His love of music is what kept him going. His passion for music is what made him the man he is today.

As a young girl, Lael LOVED “And Then” (the band) and lucky for her, her father owned the record label they were on.  For her 15th birthday, she was able to mee Brad Snyder, the lead singer of the band.  Their first meeting didn’t go as well as she would have liked.  She continued to follow the band, but began to fall in love with playing music more so than watching others.  She wanted to distance herself from her father’s empire, she traveled Europe, played small venues all over the world, but when the chance came to play with “And This”, she jumped at the chance.

Her re-introduction to Brad wasn’t at the best of times, but he was willing to give her a chance.  There was one rule “Stay away from Lael”, her father has made it so they (Lael and the band) have minimal interactions. But there is definitely a spark between these two!

This is the “everyday” rock star book you have read before, it’s little less angsty and dirty and more on the sweet side!

Great collaboration between this husband and wife author!